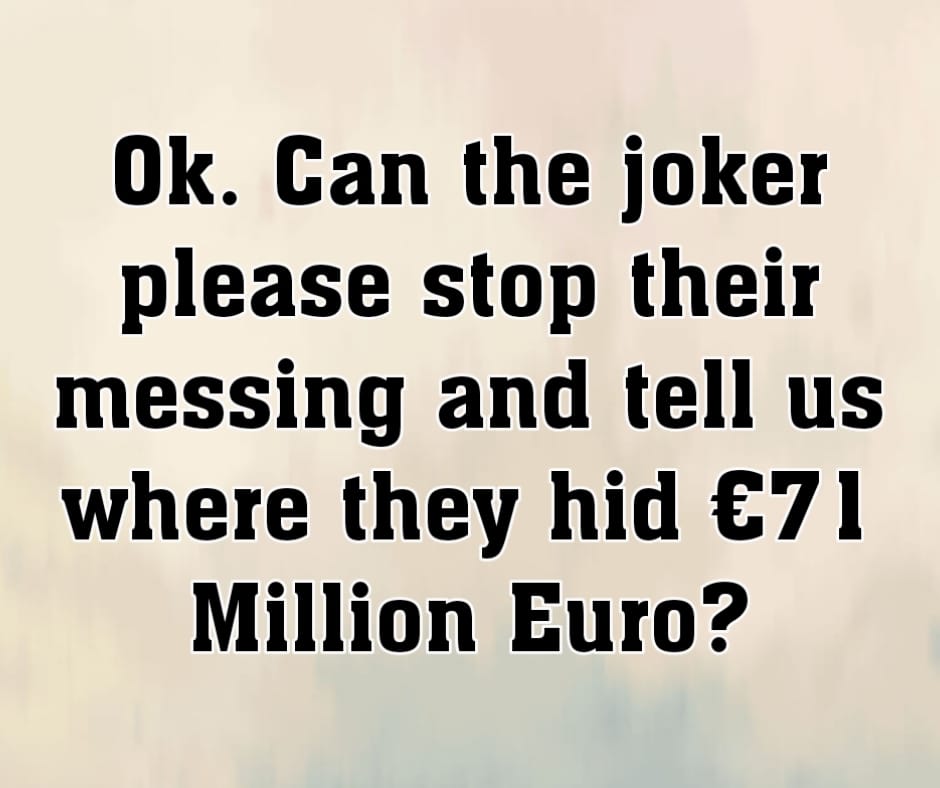 If you or I went into a bank and illegally took one hundred thousand, then later got caught, you might expect headlines in a newspaper with your name, town address, even a street taken photo of you all printed in the paper. You might even expect the news item not to be #rtecensored and you become a 30 second mention across its airwaves. Having taken one hundred thousand Euro, at the very least, you, as part of top news coverage, should be expecting to become a media darling – however briefly! You would expect this, wouldn’t you?
.
Well, not really anymore it seems – because you are likely living in Ireland. Here in Ireland, at times, certain media story pulling and burying of more news items goes on a lot. More than the public will ever be allowed to know, that even exists as a national scandal, an explosive state report or the antics of a dodgy fobbing in, money grabbing, expenses fiddling, cronyism active, conflict of interest voting TD or Senator!
.
Last week, just for example, Stephen Donnelly announced at a meeting that €71 Million Euro of public money has gone walkies care of just one state department. Yes, his. Now, to be fair, he didn’t take it. It’s not hiding under his bed in used bank notes. His sofa doesn’t look over stuffed. It’s not in a bag under his desk. It could be said Stephen Donnelly is innocent. Who am I to argue! I do not think he took €71 Million. He can barely get to grips with his job, never mind grabbing €71 Million on cash? No. The man is of course, innocent.
.
So, where has €71 Million gone? Lord knows! Even better, whoever made it vanish, didn’t get their name media mentioned. No front page headlines. No mention on RTE 6 or 9 news “Hey folks, on your way home, can you keep an eye out a bit of cash that might have fallen off the back of a truck?” Nudge-nudge, wink-wink…
.
No, the vast bulk of Ireland media has said little or nothing. Sure, its only €71 Million. It’s not like we need it or something! It’s only one state department of many that we give Euro Billions to every year. €71 million? Don’t sweat it! Heck, don’t mention it. No… really… DON’T MENTION IT.
.
All joking aside. RTE and other media didn’t bat an eyelid. Not one TD or Senator has so far public stood up and asked:

(A) “Where exactly has the money gone?”
(B) “Who was ultimately responsible for minding it?”
(C) “Did we get anything at all for it’s disappearance?”
(D) “Will anyone be held to account?“

.
Ok, fair enough. You can laugh at the last question. Sure, we all know “accountability” is an Ireland joke. A sick joke maybe – but still a joke!
.
Therein, underlies a very serious problem we have in Ireland. Be it Euro Billions on the world’s most expensive children’s hospital, the giving away of a maternity hospital worth hundred of Euro millions to a nun’s front company or just a measly €71 Million Euro of taxpayer money, there is feck all accountability regarding the ranks of those that should be far more held to account. Do I lie?
.
Who’s fault is all this? Let’s be brutally honest. At the very least – at least partially ours. We, the public are

(A) too silent,
(B) too complacent,
(C) too complicit?
(D) too brainwashed into thinking we should continue voting back into office, the same shower that makes annually sure, that there’s no proper accountability.

.
Garda investigation? You’re having a laff! Let’s have another tribunal, inquiry or commission. Then let’s bury that report too. It’s #howirelandworks don’t you know? Have to look after those legal firms. We’re creating employment for €1,000 an hour barristers! Great stuff.
.
€71 Million? It’s not even worth mentioning. It’s only one department. Sure, there’s loads of others where we can be sure nothing like this goes on. At least, that’s what we lead to believe by the usual Dail Mafia. We can trust them. Their all lovely people. News headlines? Meh!!!
.
Don’t sweat it. Have a nice day.