A Representative Dail – or is it?

(This post is likely to leave some angry. This is not the intention. Just a possible outcome. I have also done my best to leave out personal opinion/comment. What follows are basic facts!)
.
*** NOTE: There will be additional links posted in the bottom for others to verify and read even more, about this post. This is just a scratch of a deeper surface. ***
.
The PR pitch that is sometimes sold at election time, is that you should “Vote for me as I’m representative of the people“. Since the 2020 government particularly formed, a serious question has been increasingly asked.
.
“Just how far does the occupants of the Dail actually resemble the public?” A public they are supposed to be working for, not against?
Is our Dail representative of the state? Are they too in majority, feeling an economic pinch – or are they better able to survive?
.
Let’s look at the overall picture. Here are a few numbers.
.
* Your average TD’s now earns over €101,193 per year. With the public pay sector deal just announced, their own money will basic rise to €106,500+ per year. Only 5% of Irelands population manages to reach this BASIC level of wage. Only 10% reach the €80,000 level of wage.
* Senators = €70,870 basic wage.
* Ceann Comhairle = €101,193 – with additional salaried allowance of €126,255
* Leas-Cheann Comhairle = €101,193 with additional salaried allowance of €55,094
* Leader of the Seanad = €70,870 with additional salaried allowance of €21,740
* Taoiseach annual basic wage = €211,742 – without additional copious amounts of expenses, freebies, unvouched money, etc.
* Tanaiste annual basic wage = €195,231.00. (breakdown: Monthly: €16,269.25 – Weekly: €3,754.44 – Daily: €750.89)
* Eamon Ryans’ role = Thought to be around the same level as Leo Varadkar – €190,000+ a year basic wage. As part of his CURRENT pension alone, Ryan will receive a lump sum of €110,000 and an annual pension of €51,000 when he is 65, in 2028. This is an example of just one TD/Minister pension.
* The annual bill for EX-TD’s pensions equates to €8+ Million a year. Try an FOI request? You will no longer be told what any particular ex-TD is getting in public money. #Censored.
.

NOTE: The Oireachtas website (deliberately?) appears to go out of it’s way, to make it very hard to find just how much the leaders of the 2020 government are currently gaining in basic wages, never mind additional expenses, vouched or unvouched.

.
If TD’s are officially attached a committee/commission, they get another €9,691 additional allowance. For every Dail role possible, there are additional handed out extra allowances. Many roles most citizens wouldn’t know are invented.
.
Links will be posted below to verify all this.
.
Regarding the public, It was previous (prior to Russia invading Ukraine and subsequent knock-on effect) estimated that a family of four would need approximately €6,000 EUR per month to live comfortably in Ireland. That’s €72,000 a year – but less than half of the population is earning over €36,000 a year. Many earn much less.
.
The 2020 government parties (reluctantly covid) admitted that €350 a week per adult, was the BARE MINIMUM that was needed to survive in a pre-Russia invasion Ireland.

.
* Most TD’s put in additional expense claims of up to €50,000 to €57,000 per year. Their additional unvouched expense claims are (deliberate?) harder to obtain – but are thought to be around the €26,000+ mark on average.
.
TD’s can claim everything from laptops, iPhones, tablets, PC’s, office clocks to even shoe polish, as an expense and they do. For example, Bertie Aherns’ previous makeup expenses were roughly €480 per week. That equated to €24,960 per year. Bertie Ahern was Taoiseach for eleven years. A potential total of €274,560 – and that’s just for make-up – that also other TD’s could try claiming for as a work expense. It’s harder to think of things that cannot be tried claimed for! They even get ‘walk around’ money because they might have to do some walking to the Dail.
.
TD’s at the Oireachtas can use car chargers there. TDs and senators can charge their electric cars at Leinster House for less than half what it costs ordinary consumers after initially availing of the service for free.
.
Many TD’s claim part of their home is used as their “office” – so here they get discounts on such things as heating, lighting, phone bills, etc.
.
* Approx’ one in four TD’s are a landlord alone. Many have multiple varied business interests.
* Of 158 deputies, 42 (26.5%) have declared themselves as landlords.
* 4% of the rest of Ireland’s population, are only landlords.
* Fine Gael having the highest proportion — 18 of its 50 TDs (36%) have an income from renting out property or land – including Regina Doherty who has property at Ashbourne Business Park and at City Campus in Limerick.
* One-third of Fianna Fail’s 45 TDs are landlords, including Stephen Donnelly, the party’s newest recruit.
* Of 23 Independents, six are landlords including Michael Healy-Rea.
* At least one forth to one third, of the current government ministers sitting at the top ranking table, are landlords and/or have land/property/alcohol serving private business interests.
.
During the recent summer holiday break, TDs summer break, they were each getting a free €5,000 while they were off. The payment is officially justified for when the Dail is in operation. Thus they get additional money for travel expenses so they can attend it. However, during their 9/10 week summer holiday, the extra payments don’t actually stop. €5,000 x 156 = €780,000 holiday money for TD’s (on top of their summer TD wage).
.
All elected and ex-TD elected get free parking for life at the Oireachtas.
.
37%+ of Irelands population have said they cannot cope with the current economic situation. 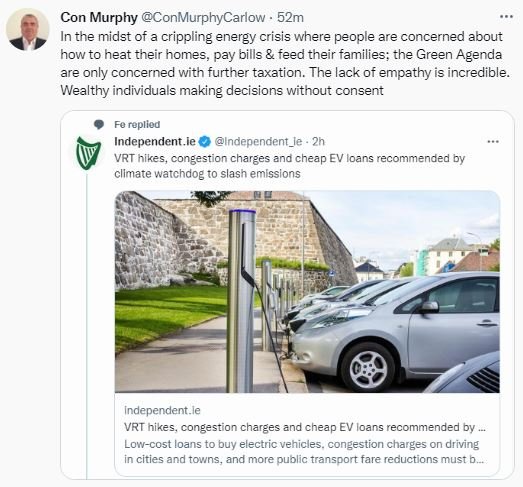 .
FOR THE RECORD: €4.5 million annual pay package is earned by special advisers who counsel ministers and ministers of state. Most of them have wages that range between €80,000 and €100,000+ per head. Eamon Ryan, for example (at the last count) has an additional eight “special advisors”.
.
The combined yearly earnings of the advisers comes to a total bill of €4,508,405, however that figure doesn’t include the pay of Alan Ahearne, who is on a part-time secondment from NUI Galway to advise Taoiseach Micheál Martin.
.
The highest earner on the list is the Taoiseach’s adviser Deirdre Gillane, who has an annual salary of €180,276. Tánaiste Leo Varadkar’s adviser Brian Murphy comes in second with a salary of €171,263.
.
A total of 18 of the advisers earn more than €100,000, a further eight earn more than €90,000 and 13 earn between €87,000-€89,072. The advisers with the lowest pay earn €67,659. The salaries exclude pension and other entitlements.
.
A list of advisers includes numerous former journalists including Fiach Kelly, Paul Melia and Susan Mitchell who all earn €101,114 each. Other advisers who previously worked as journalists are Sarah Bardon, Niall O’Connor and Colette Sexton, who all have an annual salary of €94,487.
.
More investigative digging is still continuing. This post might be updated at various times. A lot of the above is #RTEcensored, never reported.
.
*** On a further note to finish, FOI requests used to allow more information to be accessed. Now, since a previous FG/Labour government in dying days quietly rushed though FOI censoring law, citizens ability to gain info on what TDs/Ministers are up to, has become more extremely hard to obtain. They have invented new excuses for not releasing information that they used to make available. Just ask any decent journalist who struggles to get their stuff into print, past a political favouring management!