I HOPE YOU ARE SITTING DOWN.
.
Let me tell you a story about in good part, why we are short of nurses, doctors, specialists, drugs, etc. It’s made of up of parts that at the end, for those with ability to join dots or add together the parts, will see a bigger picture at the end. Truth – it’s a long story but for those willing to read on, you get a better education. Perhaps a shocking one – but an education all the same.
.
This story starts off with a Fine Gael and Labour government. During their period of government power they did many dastardly things. Many of these this were kept quiet about, as they did them. RTE failed to report such matters along with other biased media who deliberately distracted a nation in other directions. How and why they did this, is another story for another day.
.
The FG/Labour government in one national act of betrayal, decided to quietly introduce legislation that would create a relaxation of purchasing laws, remove penalties imposed upon companies and persons up to no good and take away numeric limitations regarding the grabbing of not just properties but masses of Ireland land too.
.
The next thing we knew in the years thereafter, was a FG/Labour created, foreign invasion of property vultures, gamblers and corporations that saw the dastardly acts of the two parties as an invitation to run riot in Ireland. In fact, this is exactly what the two parties wanted – as did Fianna Fail in then opposition. You see, these acts along with others, were part of a bigger European plan from Brussels. They sought the ramming in of the TTIP treaty. 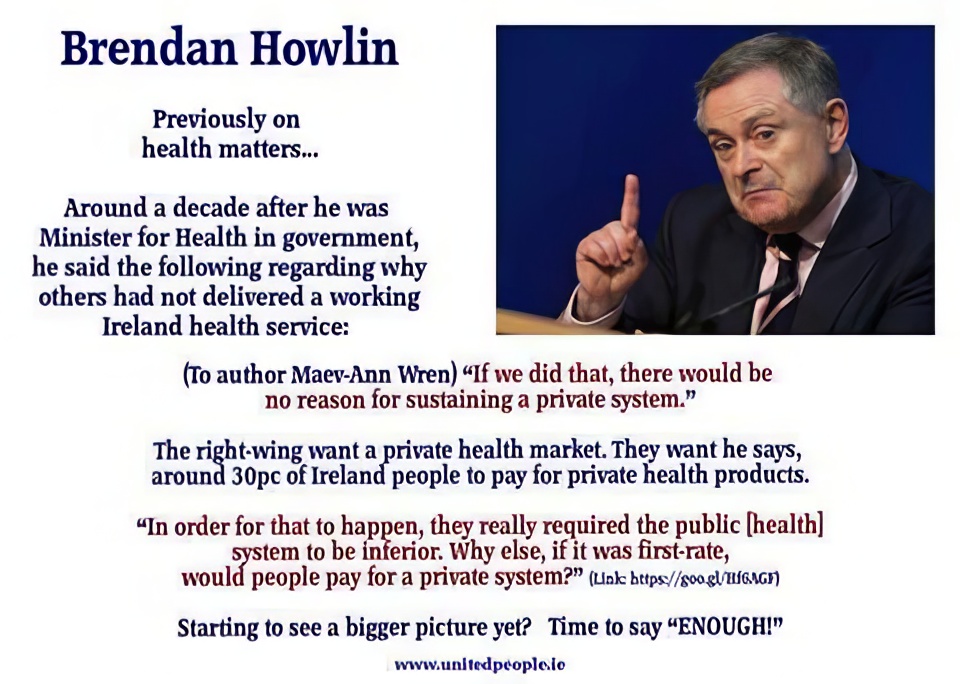 SIDE QUESTION: Has the current ever increasing housing crises (deliberate created or sustained?) helped to greater profit vulture landlords? Here a few links that might suggest an answer: LINK1 – LINK2 – LINK3 – LINK4 –
.
Now, if you think it will be easy to check on some of the details of my story, it will be – to an extent. You see, given the undemocratic agenda embarked upon by Fine Gael and Labour, backed by Fianna Fail, the principle two main parties in their last days of previous office also quietly brought in legislation that mean that “Freedom of Information” requests would be greater hindered/blocked from occurring. They saw to it by dying office day legislation, quickly rammed in, also undemocratic brought in (no public permission sought for their agenda) so that public and journalists couldn’t access a mass on information that they once could have access to. You’re not supposed to know this either – but the facts of this part of my tale can be verified too.
.
My tale ends now with the current situation in Ireland. Those that are up to their necks in guilt, in regard to creating many a mess, are now trying to PR themselves out of it – in part by trying to look like they are doing something and pass the blame on to others, same time.
.
* The usual distraction tactics are being tried on.
* The usual scare tactics are being regurgitated by the usual political chancers and law breakers.
* The usual acts on non-accountability and “let’s have another inquiry” are being dosed out.
.
Meanwhile, the public is once again being left money robbed, pressganged, overworked, overstressed, homeless, taxed to the hilt, made fools out of and more, while those that have brought all this about, will in time swan off to other roles that they know reward awaits them in private sectors they have helped to mass greater profit at the publics daily expense. It’s #HowIrelandWorks currently.
.
All this and more will continue until more people of Ireland wake up to greater reality, stop being quiet and complacent – and then hopefully vote better by not opting for the usual traditional bunch of party enablers at their local levels.
.
My – and your – story continues. However, you and I can still get to choose how it ends by 2024 (local elections) and by 2025 though a general election. How are you going to help write the end of our story? With the usual “same old” ending – or take Ireland’s story for once, into a new direction? It’s ultimately up to you…
.
To be continued…