This morning political aware will awake to the news as stated in todays Irish Independent “An external expert will be appointed by Health Minister Stephen Donnelly to carry out a review into the process around the planned appointment of Dr Tony Holohan as a professor in Trinity College Dublin.” 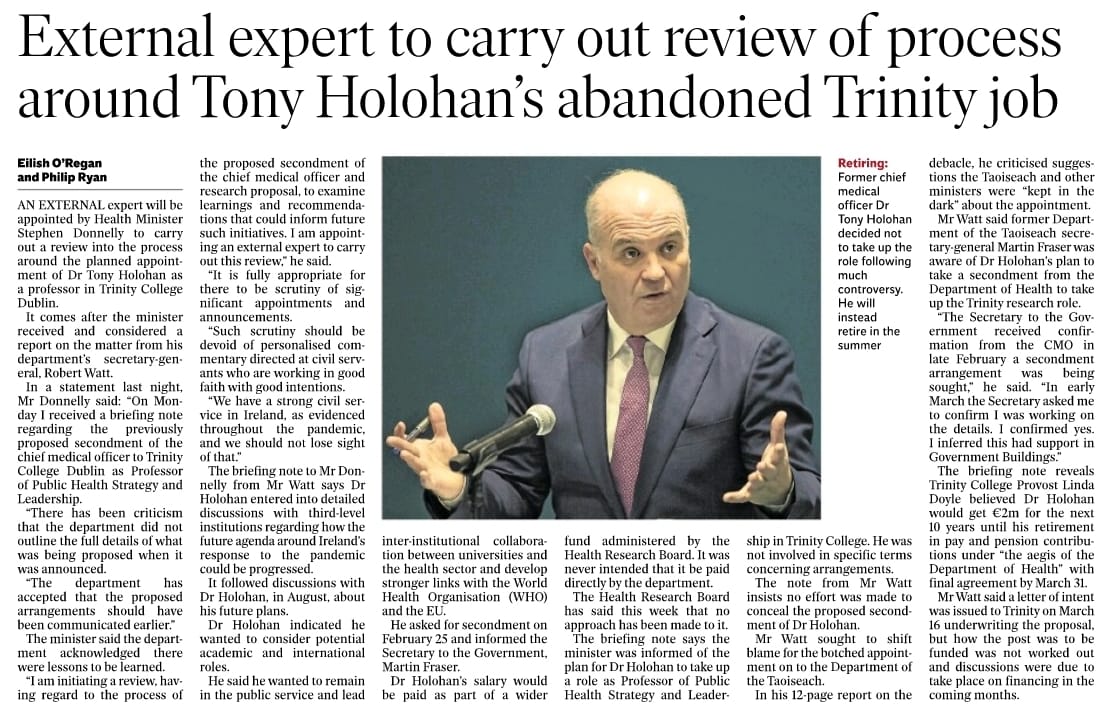 .
Media have tried already to say this is an “Independent” look at matters. Is it really? Those doing the review will selected by the government and specifically, the very department under question. The matter then goes from already possible bad, to far worse.
.
QOUTE; “Such scrutiny should be devoid of personalised commentary directed at civil servants who are working in good faith with good intentions.”
.
In other words, no one involved in the farce will be further held accountable. The review will not be allowed to name any name or account for their specific misdeeds. Something like this, is usually referred to as a “Whitewash“.
.
So what is the point of the review?
.
To quote Stephen Donnelly in todays Irish Examiner; “Examine learning and recommendations that could future inform such initiatives”. That could be claimed to be, a waffling way of stating “There’s lessons to be learned” – as quoted by Michael Martin every time a further scandal emerges with he at state helm so far.
.
Yes, we have all heard this before and yes, we have all observed that bugger all lessons are then learned, as we then see many continuing farces are new or re-created by a triple party government that now has 70+ fiascos attached to it since it formed in 2020.
.
So, we are to get another report/review of non-accountability of persons and those doing it will be hand picked by those involved in the Trinity farce. We have already one ultra fast created report offered up by one of the individuals involved – who had to go also investigate himself – with the obvious result. Everyone is innocent. No accountability.
.
Now, another review/report is being compiled by the department under very question, it (a) picking who’s to glance over things but before they even start, are (b) hampered, ordered limited in their scope of investigation. Yes, here we go again!
.
Note: As more details emerge of this next government farce, more questions need to be asked. These questions I will list in a separate post. Judging by specific details emerging just today within media print, there are definite answers need to be given up by individuals involved. The timeline of events, for example, is questionable to say the least! Details in later post. Meanwhile – here is the already outstanding questions still unanswered: LINK

More #TrinityGate Questions Arise.
.
If you were to read a front page Examiner article this morning regarding a still ongoing fiasco, you likely will be confused over a timeline of events. In fact, some of you might even miss the implications of an important timeline – and the subsequent questions that then further arise to ones already outstanding which have still not been answered.
.
The Examiner article doesn’t help by the confusing way it lays out events that have happened – so here is a clearer timeline.
.
1. In August, 2021, there was apparently discussions with Mr Holohan with others about his next job role. He indicated at this point, desired to go college employed direction.
(a) Who was also involved in these talks is unclear and whoever they may be, are declining to make themselves fully known!
(b) Why wasn’t ministers then informed of these talks?
.
2. Mr Holohan asked for secondment on Feb’ 25th, 2022, and informed the Secretary to the Government, Martin Fraser.
(c) Why wasn’t this request officially passed on to ministers even at this time?
.
3. Mr Watt says that a letter of intent was issued to Trinity on March 16th.
(d) Who wrote this letter?
(e) Who indeed, setup this now arranged secondment position created and why didn’t they, themselves, bother to inform government ministers?
.
4. There was no final agreement on the secondment reached, it seems till March 31st.
(f) Who was involved in the creation of the final agreement?
(g) Why was the details of who was actually going to pay the mega wages, apparently left out of this supposed finished agreement? This exclusion is bewildering.
(h) Why indeed, leave them out?
(i) Who’s job role was it – and still is – to oversee such things?
(j) Who’s official job role, is to legally sign off on such financial things?
(k) Who specifically created the actual Trinity new position? Who signed off on it there, at that end? Why wasn’t the funding for that position clarified at that stage?
.
5. The Health Research Board says – this very week – that no approach has been made to it.
(L) With all the discussions apparently going on and all the people involved in those discussions, how come the board was left out? Who’s legal responsibility is it, to inform them?
(m) With all the discussions apparently going on and all the people involved in those discussions, how could a job be arranged and supposedly finalised in detail – then be signed off by someone – and one of the bodies involved not be told? Who’s job was it to tell the board?
(n.) How can a job be arranged – and finalised without the money sorted – and then finished in agreement without principle people needed to be involved, actually left excluded?
.
As we now know, many of the above question details were apparently left out of a Mr Watt 12 page created report . A report where he was expected and indeed, allowed, to investigate himself – that was quickly produced in a matter of days – with the inevitable result. A new Irish record for report creation, to boot!
.
Now we are to get an “Independent report” – so says the PR – where one of the departments actually involved and under investigation, will:
1. Get to decide who does the investigating (more “We investigated ourselves and found ourselves innocent” ?) and
2. Will not allow particular people to be held to account! They are to be excluded and the scope of questions will be further deliberate limited.
– QUOTE; “Such scrutiny should be devoid of personalised commentary directed at civil servants who are working in good faith with good intentions.”
.
Yes, the farce continues.
It’s #HowIrelandWorks apparently!