Another Scandal You’re Not Meant To Know About 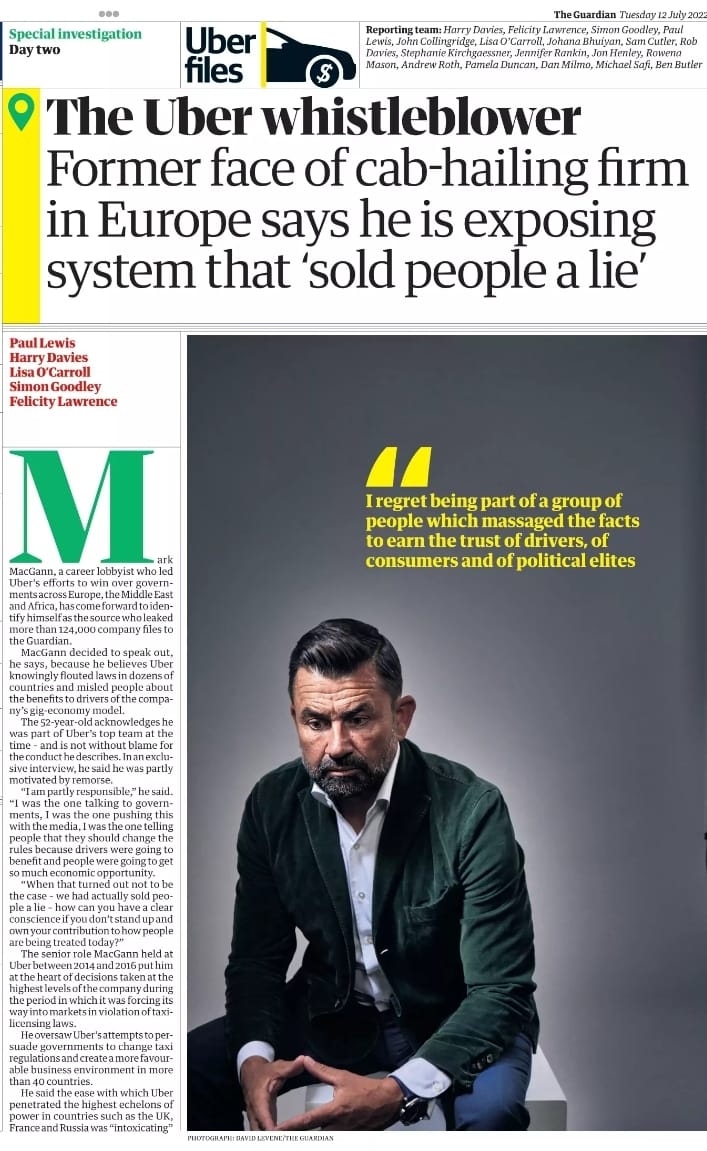 Revelations continue to spill out about how the Uber company worked and lobbied their way into the heads of country leaders, who then ran with their notions that were utterly wrong and baseless.
..
From Macron to Varadkar, the leaders stupidly lapped up the company false spin and, in the case of Fine Gael, stuck it into their own political manifesto without it seems, actually doing independent checking of facts.
.
In France, calls are starting to arise for a state inquiry. Criticisms are being levied that that Macron had done Uber’s bidding at the expense of workers’ rights and against the will of the left-leaning government he served at the time. Similar accusations have already being laid at the feet of Fine Gael and it’s top rank – who have already come out and started trying selling to the public that they have done nothing wrong.
.
The French president offered his first public comment since the Uber documents were published on Sunday by Le Monde, The Washington Post and other outlets. It was a statement of defiance but while making it, got very emotional, knowing he and his party again had been exposed for completely cocking-up – as have other international parties in other countries, including possibly Ireland!
.
Back in Ireland, Fine Gael heads are being kept deliberately down, nothing much (or at all) is being deliberately being said by them and biased media is doing its best to continue bury the international scandal. The matters is largely #RTEcensored, for example.
.
Fianna Fail and Michael Martin, who has yet again been given another huge opportunity to show that Fianna Fail is not attached at the hip of Fine Gael, and another golden opportunity to criticise a party that will likely steal some votes from them at the next elections, will once again – thanks to Martin and FF silence, let these opportunities slip. Lower ranks of FF and backbenchers will once again not be pleased at this repeated outcome.
.
Normally Fianna Fail (if they were not needing FG to keep them in power) would jump fast on any chance to attack FG – but to save Michael martin and his fellow top table occupiers are biting their tongues once again, in order to keep their high pay, perks and pensions growing while in government positions,
.
The Uber files, containing executives’ internal messages from 2013 to 2017, were leaked by former Irish Uber lobbyist, Mark MacGann, to Britain’s Guardian newspaper, which shared with the International Consortium of Investigative Journalists, a D.C.-based non-profit newsroom, and dozens of other news organizations worldwide.
.
According to leaked documents, Uber managers and lobbyists believed top elected would champion them by pushing regulators to be “less conservative” in their interpretation of rules limiting the company’s operations and by attempting to ease rules that hampered company’s expansion plans. As things went, Fine Gael jumped on the Uber detrimental notions, and then even put them into their political election manifesto – coming off as if they were they were their own thought up ideas. There was no mention in their manifesto that in fact, the Uber notions they were PR selling, were in fact coming from others whispering in their ear from a lying international private company!
.
It’s no wonder that Fine Gael is now trying like hell (along with media friends) to keep the whole scandal away from the attention of the Irish public. Having survived one Dail “Motion of no confidence” by buying votes from other TD’s including a convicted criminal, Fine Gael are quickly trying to move on from the next scandal that’s blown up which includes them too.
.
As far as Fine Gael is concerned, it’s a case of “Move along, there nothing more here to see” – but there is… The inquiries are starting being to be called for, outside of Ireland. How long Fine Gael and it’s stooge party, Fianna Fail, can brush similar calls off, remains to be seen!
.
…But then again, you’re not supposed to know all this!