Are You That Stupid?

I have to ask a question and I apologise if my asking does even offend! Just how stupid are you? I ask because clearly some in the current 2020 formed government think you must be stupid. They are (again) certainly treating you as stupid.

Latest example is Mr Martin saying that Fianna Fail have only been in government with Fine Gael for 15 months – and he wants you to totally accept this as 100% accurate.

You and I know that in the previous government of Fine Gael, that party entered into a “Confidence and Supply Agreement” with Fianna Fail. What does such an  agreement generally consist of?

That’s Fianna Fail during their last term of office, joining up with Fine Gael as both parties decided to direct how the country was managed by a government. If any of the above sounds familiar to you as Fianna Fail does the same again with Fine Gael, while running/ruining the country – you would not be on your own in such thinking. 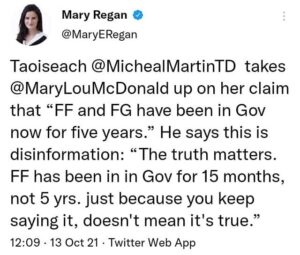 Yet, for all this, Michael Martin absolutely insists that he and his party was not part of the past government. Really Mr Martin? Just how stupid so you really think we all are?

Let stop kidding ourselves. Why don’t ye just amalgamate parties as there’s now in the eyes of many public, bugger all difference between your two parties.

It’s easy to go on. The two parties are now regarded by many as two cheeks of the same backside. A backside I might add, that at the next general election, everyone knows might get ‘a good kicking’ by a voting public.

To conclude, please don’t treat us all as being completely stupid – because:

In short, treating us as stupid just won’t win you more votes with many. Instead, it could help you lose more!