Beyond Leo Fantasy, Is Reality.

In the last week Leo Varadkar made two serious gaffs. I summarised them both through THIS Facebook posting, so I won’t regurgitate the whole thing over again. I will however, go into detail on a matter I mentioned in the post. That being the true reality of home building in Ireland. First, some quick facts.

While these numbers are Dublin based, they reflect the state of the wider population in Ireland.

Leo Varadkar’s blustering of building 40,000 homes per year is not even a funny joke. It’s both an empty PR stunt and in reality, not remotely achievable under the way his party, Fianna Fail and even the Green Party are continuing to operate – or in some cases, unwilling to operate.

Another unarguable fact – despite Fine Gael in particular trying to distract away from it and deliberately remain silent about it – is that since 2011 and the reign of Enda Kenny, the Fine Gael party has done little but open the vulture fund/private investor floodgates so that they may come swooping in to massive buy homes, land and properties galore, in repeated massive bulk.

They try to hide this fundamental track history as we struggle through 2021 but it’s recorded fact. So much so that one Fine Gael minister met representatives from such private profit making setups over 60 times, in one year alone! Deliberately RTE and biased media ignored true fact but still recorded elsewhere, true fact.

Cutting To The Chase.

There was a time previously when the state was able to build up to 80,000 homes a year. That was some time ago. Todays build record is vastly different and build numbers that have massive depreciated, were very low even before Covid-19 even hit. cold fact is that since 2011 and the modern era of Fine Gael being their government antics, from the get-go, their willingness to still build homes in high numbers even half hat of the past, every year, never materialised. They simply couldn’t be bothered.

What happened in the meanwhile, is that house prices have rocketed upwards to absolutely ridiculous amounts! The ones that could be built and that could only be afford able on the wages of two people, earning serious money – so as time went by, more few and far between as the years increased. 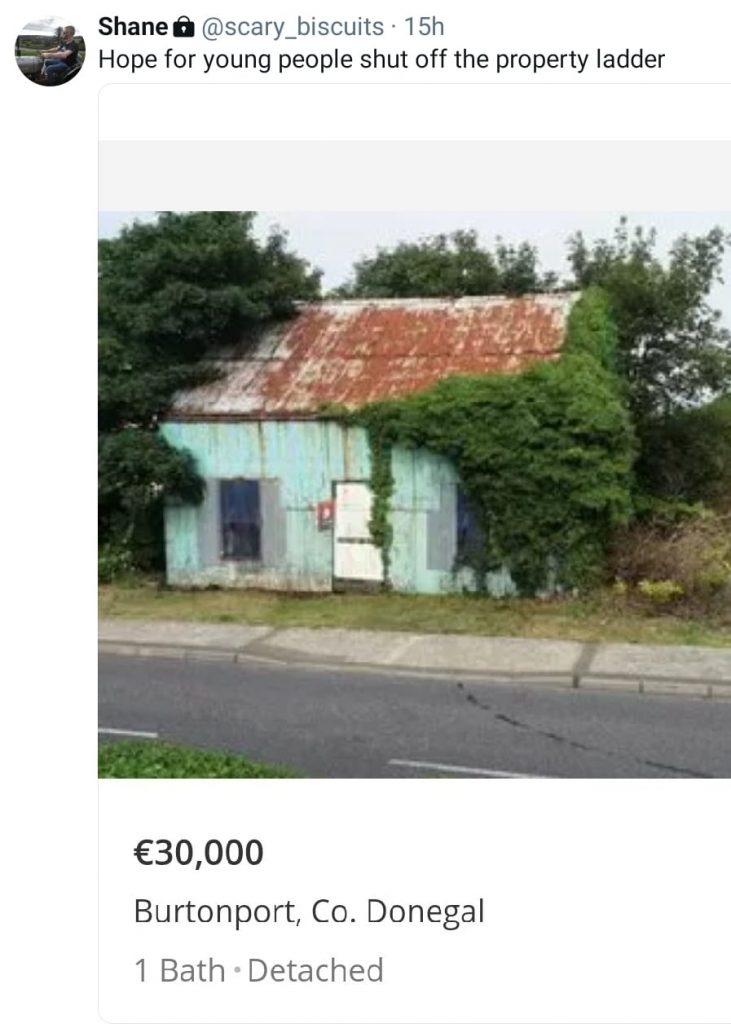 Where there was once the ability to build up to 80,000 homes in a year, to do even half that if the miracle of Leo Varadkar’s words were to be even achieved, serious obstacles would have to be addressed and overcome?

There is a serious lack of builders, manpower and materials to build homes. Fact. This limits the states ability to build. What materials that are available, are snatched up by private investor setups (willing to outbid the state) with huge money behind them, invested so they can make a further huge profit killing down the road of time. The domino effect of all this, is to help hike up home prices.

When builder/investors see the state announcing grants to wanna-be home owners, they know they can up their property sale prices so such grants are swallowed up even more! Other not able to qualify for such grants are immediately out-priced. They can’t even begin to get one foot on any property ladder as it’s been deliberately further distanced from them by the investment setups.

Land that has been in the hands of the likes of NAMA, has not been taken up by the state but instead, all too often passed onto private investment setups and Vultures who then (a) ‘sit’ on the land till the value of it goes even higher (they consider the land an investment, making money for them while nothing actually happens on it) or (b) they build on it with properties that with higher set prices, again, a great percentage of the national population are outpriced from the very start. They can only look in frustration at the huge prices of private builds.
Land and site hoarding alone, has become a very serious problem. There has been talk (there’s always “talk”) say government elected, to address the hoarding – but many years on, the rest of the nation is waiting for decent action from Fine Gael and Fianna Fail.

State land that is owned by the nation, has not been used enough for public social building. Instead, all too often, state land has instead been repeatedly sold to private investors, not built upon by the state. A future government needs to address this too. The current parties are again, unwilling to.

Greater efficiencies in state planning and legal system, needs to happen. Not just more ‘talked about’ but actually made occur. There should be penalties for those that are proving themselves to be dragging their heels on this. In other words, more state accountability. again. Fine Gael and Fianna Fail won’t make this happen. Obvious why! Their own incompetent, they know, would end up being punished for their inability to operate better.

The planning judicial review process system needs to be reformed. Sadly however, like many other reforms that needs to happen regarding judgements and those issuing them, the old two main parties are in no hurry here too. Fear of their own losing out by such reforms? Decide for yourself!

Rather than constantly reply on just private builders to address a housing crises in Ireland – as Fine Gael had long espoused was the main solution by far, to their mates (and own) gain of course, a future government needs to see that the state is ultimately seen as the principle solution to home builds and resolving a still growing homeless crises.
.

The ICTU (Irish Congress of Trade Unions) has pointed out five areas that needs to be addressed.

Declare a national housing emergency and begin a major housing build programme. This is something I have on public record, been also calling for, over increasing years.
Establish a legal right to housing. Only now, because Fianna Fail (a) are voter poll plummeting and (b) seen to to previously do what is right, are now starting to PR say they will do this. Like Fine Gael, what they say to win votes and what they will ultimately do, are two different things.
Take action to ensure security of tenure and rent certainty for tenants, existing and future ones.
Stop evictions into homelessness.
Develop a national land management policy that will end speculation and hoarding – and will further ensure that public land is reserved for public housing. This is something I have regularly addressed across social media.
.

With the backing of the Fianna Fail and Green Party, what Fine Gael has done instead, is to increase legislation that allows vultures and private investment funds to hire more heavy muscle so that they may be sent into evict even more people with far less judicial oversight and such heavy muscle faces less personal accountability for their evicting actions. Not exactly beneficial to the ability of renters to hold onto their homes! Of course, like many things that go unreported by RTE and other biased media, all this remains vastly unreported too.

Other items are also deliberately buried away by a questionable Fine Gael, Fianna Fail and Green government. For example, The Kenny Report (also known as the committee on the price of building land, 1974) strongly suggested proposals to control the price of land for housing, including local bodies to be given the right to acquire undeveloped lands.

The usual parties have been decades silently sitting on this report, deliberately doing little or nothing. The implementation of it, of course, would interfere in the long ongoing Fine Gael plans to help their vulture friends, their own inner party private investors/landlords and other donators/backers to the party, long term plans to greater private profit.

…But you are not supposed to know all this either!

Fine Gael in particular, have more secrets than they can give away – and some in Fine Gael even likes to give the rare one away – and stuff laws that they break! They consider themselves untouchable. Again, little or no accountability. A constant underlying issue that is fundamental to be resolved in a great matter of crises issues that exist today within Ireland. A fundamental problem that UnitedPeople from the start of its existence, has repeated stated is a problem that needs to be resolved urgently and has offered further solutions to. Plug over.

No wonder then, that it’s being ignored by current elected and their biased media friends?

If the current housing situation is to be genuinely attacked and resolvent is to begin in earnest, we must first openly admit to a number of things. Current matters being ducked that needs to be addressed. We need to be more honest and state we are incapable of building 40,000 homes a year till other matters are addressed first – and addressed far quicker first. We need to see that, in the meantime, homeless and those being unfair evicted, have greater ability to gain a roof or hold onto whatever roofs they do have over their heads!

Leo’s 40,000 by-election (later general election) PR gimmick of promising such a large build number, is not being gullible swallowed by those with a working brain, further knowledge of a lot of facts and those that are simply not stupid or a member of his questionable party.

Heart Of The Housing Matter. Part One. – LINK

Housing – What You Are Not Being Told! – LINK