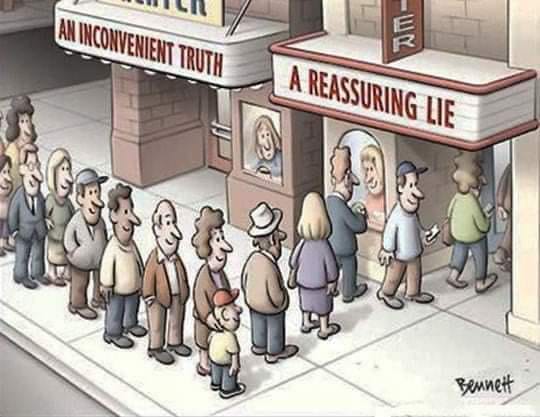 In a previous post (LINK) on my family website, I detailed how Ireland’s people have become used to their media giving material that is consistently spun in one consistent direction (FF/FG favouring) or there are further forms of censorship imposed as news items are buried. The public being either misled, not given a greater full picture on matters – or in too many cases, deliberately kept completely in the dark as to what’s going on!

The latest moves this weekend to silence top medical officials from speaking to the public, is a further dangerous extension of two parties that have a long history of information suppression. 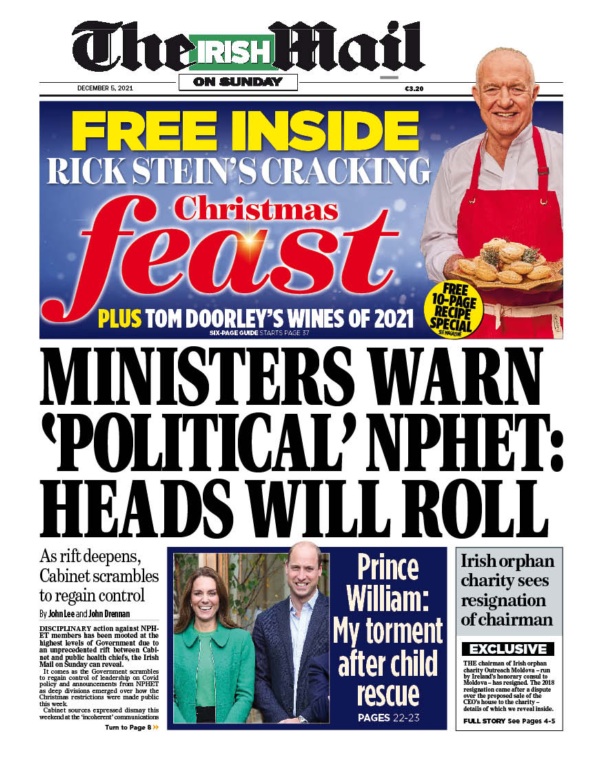 Now, I will be again frank here with the public. A number of citizens in Ireland are opposed to Dr Tony Holohan and his position, head and face of National Public Health Emergency Team (Nphet). Reasons for not liking him stem from possible past work history, to concerns about current activities.

That said, Nphet’s combined task is to come up with the best medical proceedings that can/should be applied during the current Covid period. Regardless of who is in government charge, their assessments and their medical advice is important, regardless of who above them (non-medical trained) is sitting above them.

Let me put it another way.

A sick person comes into a hospital. A team of medical doctors gather around to examine the sick person. They come to some assessments after tests conclude and then propose a course of treatment. The best way forward in their minds, to gain a positive outcome. Suddenly, the board of the hospital speaks up and says “We say treatment must be altered due to reasons that will also effect us too!”

What the board is doing, is interfering with the original, best thought, way forward – and they do so for own reasons that have got nothing to do with the actual sick person, who is at times shows signs of still getting worse…

Now, the doctors given their medical training and giving reached a consensus after looking at the sick patient, speak up and point out that the best medical treatment is a certain way and that should not change regardless of a bunch of board suits with their own agenda. A separate agenda that sees the actual sick person be dropped in cure importance and medical focus.

The suits not liking their own agenda (part self-preservation) being affected by the medical fraternity, then moves to silence the medical professionals from telling the sick patient, fuller greater truths about how their health currently is and stops them from further telling the patient more honestly what’s the best further way forward for them!

At this stage, let me ask two questions.

1. If you were the sick person, regardless of disliking one of the many doctors, would you rather have the medical fraternity still saying how you should be treated or would you rather the non-medical trained board suits take charge of your treatments?

2. Would you prefer the doctors to be able to still speak to you or would you order the board suits force then into silence or only be allowed to speak through a system that filters their assessments with the agenda of the board still in mind?

This is where Ireland is right now.

* The patent is Ireland.

* The board suits are our government.

* The imposing of censorship or word filtering, is 2021 real. To the non-blinkered, aware awake… 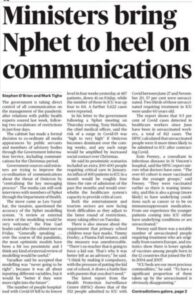 Current and past FF/FG governments edicts have imposed rules that say medical people are not allowed to speak directly to the public. All words must be political filtered first. I say this alone, is a dangerous path to take if the best interests of the actual patient is to be still kept ultimately paramount.

Inserted into work contracts at lower levels, regarding nurses, ambulance drivers, many civil servants across many an Ireland departments, are quiet restrictive terms that in short, tell the trained and experienced people “You must keep your mouth shut“.

The only way they are allowed to speak, is collectively through a rare representative, allowed rarer to appear on state, (government financial controlled and influenced) TV or radio networks – so their words too are time-limited, edited, boardcasted to those that only tune in a more selective times.

Now, the government, having effectively silenced or limited speak to the reach of lower ranks, now seeks to do same to top medical ranks also.

Regardless of what might be best possible medical solution, the expression of medication needed, is to be further political stopped or at least filtered.

Again I ask. Is this best for the actual patient?

Should politics interfere with medical advice and should political heads be allowed to stamp out medics from still being able to freely speak?

I say that be allowing by them to speak, in this current situation, their words can either be supported or better open challenged. By allowing them (and others of trained skill) to speak, the general population gets to hear/see of possible greater bigger pictures, oft-times that political board table suits would rather they not be made further aware of!

In the current Ireland patient situation, should Nphet be made shut up or have their prognosis be political filtered by non-medical people – board political suits that more voters increasingly want to see the back of?

Do you support more state censorship or rather open information sharing and possible debate?

It’s over to you…