In todays Irish Mail (14th, Oct, 2021) there is a letter from a medical professional regarding how those that were at the forefront of the Ireland Covid situation, have not been genuinely been respected, never mind rewarded for their efforts.

The letter speaks for itself. 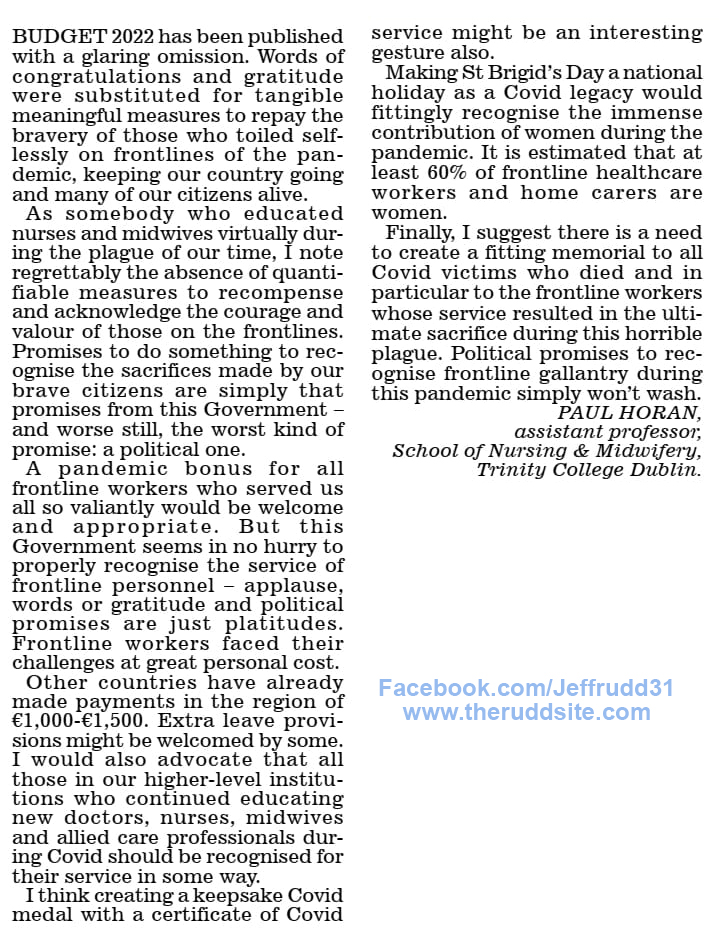 I think most decent people would agree with the sentiments expressed by Mr Paul Horan.

Cold reality is that student and qualified nurses during the past months of the crises, have been run ragged for little or no pay (especially some students in this case). They have been left feeling exploited by top ranks with the HSE and government.

Since the 2020 government formed, TD’s have been availing themselves of up to four pay rises, dishing our 50% pay rises to councillors in every location in Ireland. TD’s eventually gave some nurses a 1% pay rise. Some – not all.

An obvious question has to be asked? Where is the fairness or even equality decency?

It was nurses, ambulance drivers and additional staff, including administration people, etc, that were at the forefront of dealing with things on the ground. While TD’s and indeed, Senators, were lying in their bed, sleeping easy every night, our ‘on the ground’ people were still working 16+ hour shifts while under hourly pressure to save lives day to day.

Some people might say “That’s what they signed up for, if they wanted to become a nurse, etc.” Such short-sighted comments are usually found expressed from dregs of Irish society, on Irish forums as they hide behind fake names, purposely used regularly to run down others behind their own cowardly masks – but the rest of us know that the real hero’s on the front line, have gone above and beyond what might be expected from a medical trained person in what should be, just a standard working day shift. A shift, I might add, that should be of decent standard length. Not one that often rolls into another day!

What did our far over-paid, well perked and pensioned TD’s give the medical community at first – and only after a serious length of time? A round of Dail applause for a minute. “You are a great bunch of life saving people. Here… Take that as your reward!”

It was only though sustained public pressure and showing the government pay imbalance hypocrisy, that later they with reluctance still, gave some nurses a miserable 1% pay rise. Getting that out of government TD’s, was akin to getting blood out of a stone. The stone being some government TD’s hearts?

So yes, I agree with Mr Paul Horan.

However, I don’t think that those who put more physical effort into saving lives in one day than any TD in a month – those who put their own real lives at risk some times, multiple times daily – those who worked extraordinary hours day in, day out, and still do – those who are our all our first line of hospital help in a medical crises – should be just left with a simple extra day off. Let’s be honest, some of those we are rewarding, will have to ‘cover’ for those on that day off. We need to thank them more.

We can start doing that by doing something that really would affect their own lives week to week. That means looking better after them too, if only by helping to to ease some financial burdens off their long hour, worked shoulders and backs! We can start to thank them (and other staff) by showing more decency and respect – by ending the double standard pay hikes elected get – while more real life saving, on the ground hero’s get far less – with far less regularity!

End the imbalance. End the injustice here. That would be a damn good start to further correcting things in Irish society. There’s a lot of work to be done in that area – and quite frankly, the current usual parties of past and present government are not up for the job. They are often too busy just rewarding themselves (and their mates) more and more.