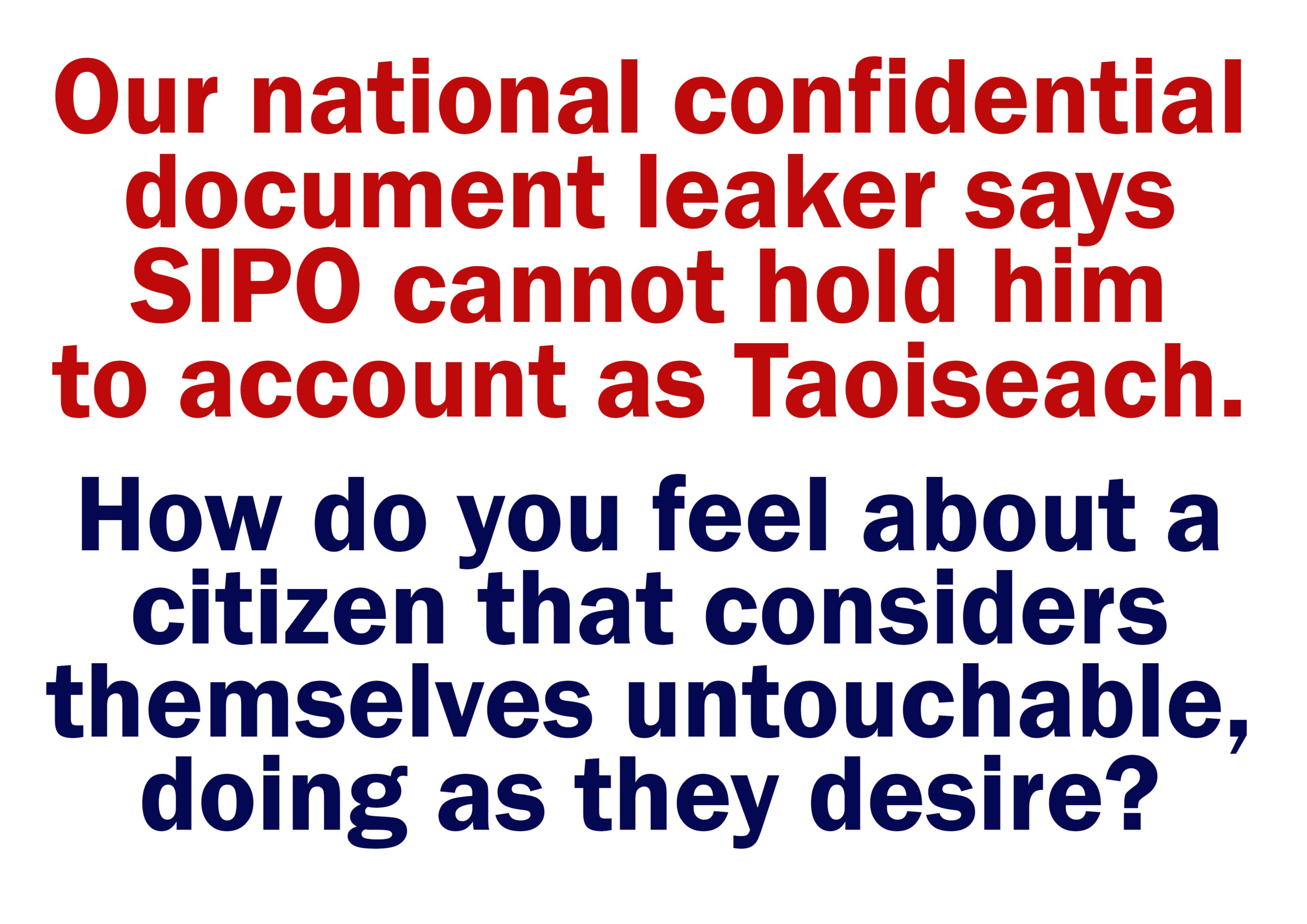 In a speech at the recent Fine Gael ard fheis, Tánaiste Leo Varadkar praised Taoiseach Micheál Martin’s “decency”. And sure, who’d take issue with that? These gentlemen have presided over significant damage done to many of the people of this country, but that’s a political failing, not a personal flaw.
.
Politics has changed. I can’t, for instance, imagine Mr Martin or Mr Varadkar accepting a thick envelope of cash from a shady business type.
.
Once upon a time, not all that long ago, the average shady business type had to request bent politicians to form an orderly queue to collect their thick envelopes. Today, I’d bet the level of financial duplicity among TDs (in terms of backhanders and the like) is no higher than it is for the rest of us. In the bad old days — well, you’ve heard the stories, and they’re all true.
.
The point is, this moral improvement among the political classes didn’t happen by chance.
.
Before the reforms, when funny money began turning up in lots of places it shouldn’t have, politicians were pushed into setting up tribunals of inquiry. The resulting irrefutable evidence was so shocking it led to real change, not just window dressing. Long, long ago, when Charlie Haughey was a child, we foolishly thought the Statutory Declarations Act, 1938, would keep the politicians honest. By the time we finally figured out the extent of the plundering being enjoyed by Fianna Fáil and Fine Gael politicians, we had to create the Ethics in Public Office Act, 1995. And the Electoral Act, 1997.
.
One more consequence of the backhander culture was the creation of the Standards in Public Office Commission (Sipo) in 2001.
.
Sipo’s mere existence, and the routine collection of information on TDs’ assets and party donations, made plundering somewhat more difficult. And the increased chances of villains being found out has, I think, made it more risky for politicians to take that route. However — there’s a fly in the ointment.
.
A couple of weeks ago, Mr Varadkar announced Sipo had cleared him of “any breach of ethics or standards” in the infamous case in which he leaked a confidential document while taois- each in 2019. As we pointed out two weeks ago, Mr Varadkar’s claim of being cleared was false. He was not cleared — Sipo decided not to investigate his actions, for reasons it’s hard to credit.
.
This case has not only damaged Sipo, it has created a legal loophole that threatens to leave any future taoiseach completely unaccountable to any oversight. This flies in the face of the valuable reforms that emerged from the days when backhanders were delivered openly in Conway’s Pub on Dublin’s Parnell Street. The Varadkar leak should never have gone as far as Sipo. The ultimate authority is the Taoiseach, who knows Mr Varadkar broke the rule that applies to every single public servant — you have a duty of confidentiality covering anything you might learn in the course of your job.
. 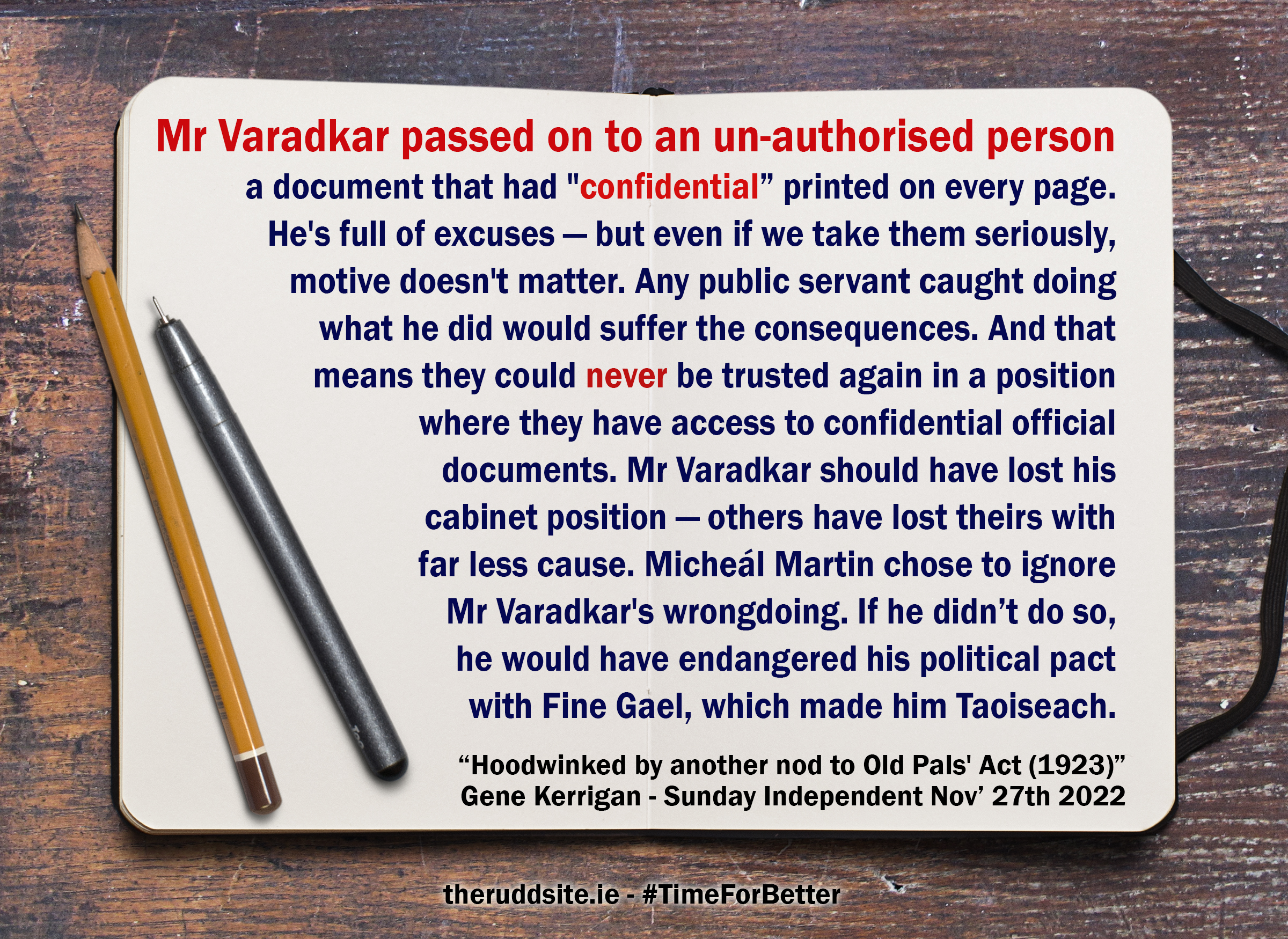 .
Mr Varadkar passed on to an un- authorised person a document that had “confidential” printed on every page.
.
He’s full of excuses — but even if we take them seriously, motive doesn’t matter.
.
Any public servant caught doing what he did would suffer the consequences. And that means they could never again be trusted in a position where they have access to confidential official documents. Mr Varadkar should have lost his cabinet position — others have lost theirs with far less cause.
.
Micheál Martin chose to ignore Mr Varadkar’s wrongdoing. If he didn’t do so, he would have endangered his political pact with Fine Gael, which made him Taoiseach. It’s unfortunate that the only person with authority in this matter — since Sipo has opted out — had a personal stake in the outcome.
.
Well might Mr Varadkar publicly applaud Mr Martin’s “decency”.
.
The gardaí spent 18 months investigating if Mr Varadkar broke the criminal law. It would take about five minutes to conclude Mr Varadkar didn’t break the law. But, y’know, ye have to be careful dealing with them politicians, so ye ended up with Sipo. Last Monday, the Irish Independent published a piece (LINK) by Fionnán Sheahan, who revealed much of the detail of the failure of Sipo to do its job. We knew Sipo copped out by claiming its powers were restricted to TDs. Sipo claimed that while it has jurisdiction over TDs, it has no jurisdiction to inquire into the behaviour of a taoiseach.
.
This is absurd.
.
The positions of taoiseach and TD are inextricably linked. Only a TD can become a taoiseach; and a taoiseach is elected by TDs. The taoiseach remains a TD. The taoiseach is first among equals.
Nevertheless, Sipo decided to split Leo Varadkar in two — and allowed the taoiseach half of him to take the blame for the leak.
.
The TD half of Mr Varadkar, they solemnly decided, didn’t perform the leak. Therefore, Sipo could not investigate the wrongdoing. This was the technicality on which Mr Varadkar was ‘cleared’.
.
There are Jesuit philosophers who would blush at this theological twisting and turning.
.
In ‘clearing’ Mr Varadkar, Sipo made the taoiseach the only political position that it may not hold to account. It put the taoiseach’s office outside the reforms distancing us from the bad old days. What we didn’t know until Fionnán wrote about it last week was that Mr Varadkar himself provided Sipo with that technicality. Mr Varadkar — or his lawyers — wrote to Sipo claiming that he leaked a confidential document “in his capacity and role as taoiseach and head of government”. Therefore, the part of him that’s a TD has nothing to answer for. And Sipo can’t investigate the admittedly guilty part of Mr Varadkar — the taoiseach part.
.
All of this was nonsense, of course. The Code of Conduct for Office Holders is clear — and Mr Varadkar is undeniably an office holder.
.
The Code of Conduct says office holders must “respect confidences entrusted to them in the course of their official duties”. Who publishes that code? Let’s have a look at the front page: “Published by the Standards in Public Office Commission.”
.
When considering the Varadkar case, Sipo seems to have forgotten its own Code of Conduct for Office Holders. Since independence, the FF-FG combination became comfortable governing the country under a wonderful piece of imaginary legislation, the Old Pals’ Act (1923). We had to have rules, of course, but — by and large — they apply to the little people. When in trouble, the Old Pals’ Act (1923), complete with amendments covering nods and winks, trumps everything.
.
The reforms that came out of the Haughey scandals were supposed to cut that out. That’s why we have rules — to take subjectivity out of it.
.
Post December 17, Mr Varadkar becomes taoiseach again, and he will have access to every single document in the possession of the State. And an assurance from Sipo that the body set up to hold politicians to account has no jurisdiction over him. I think the problem here is glaring. The man who is about to be reappointed taoiseach by the Fianna Fáil/Fine Gael consortium has a history that is — let’s say — problematic. When last in that position, he did not behave as the Code of Conduct for Office Holders says he should. And the body charged with overseeing him has announced that it cannot oversee the actions of a taoiseach.
.
To proceed with this as though there’s nothing to see here is just plain wrong. The old pals created the problem, let’s see them fix it.
.
End.