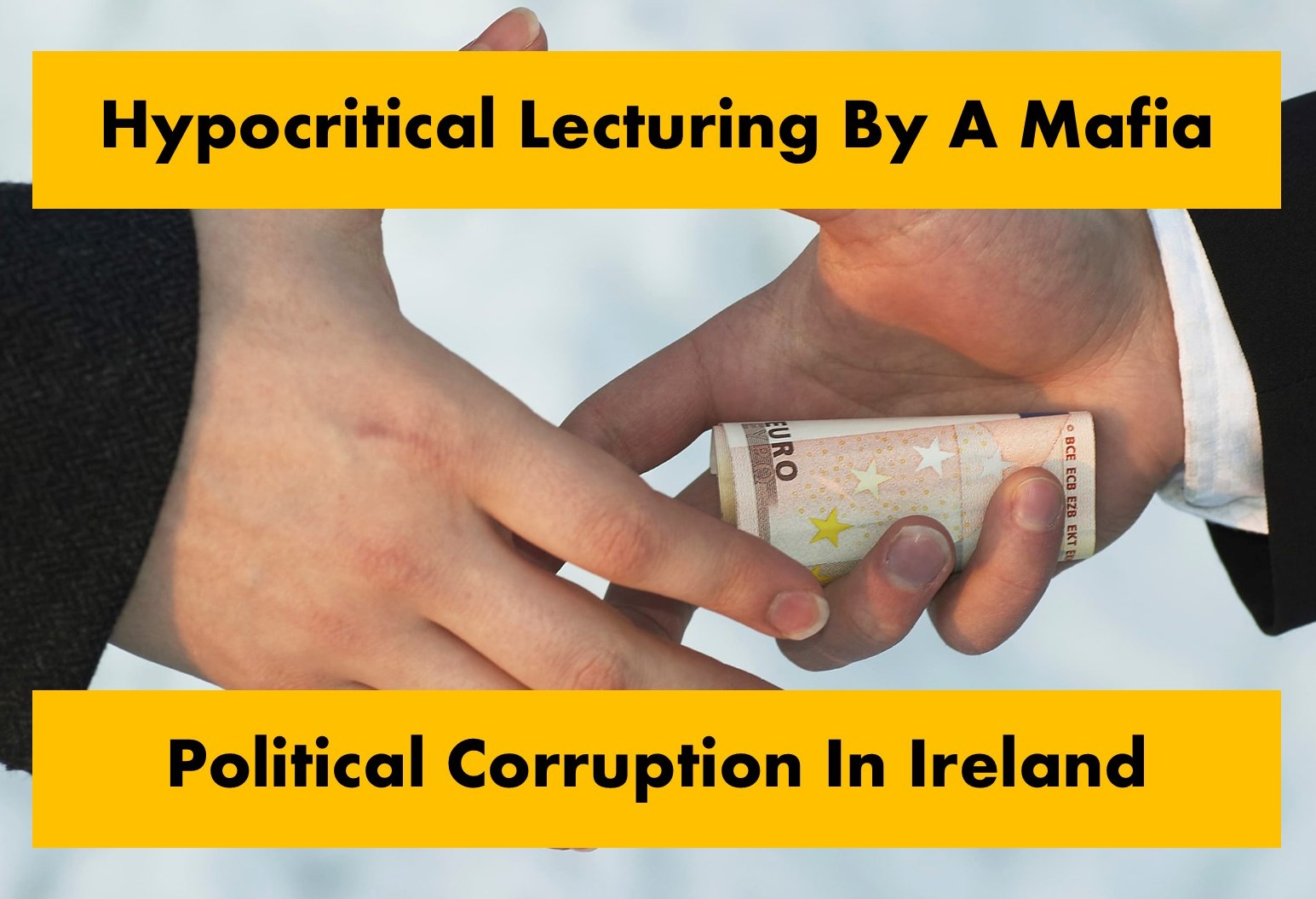 The political Mafia that is the current 2020 formed government, is made up of Fianna Fail, Fine Gael and the Green Party. Last week one top ranking representative of this Mafia, lectured a member of Sinn Fein over an incident that in fact, the member of Sinn Fein was eventually not charged with. It was bitter, gutter level ‘muck throwing‘ by someone espouses they are better in all things. Their behavior was far from this. The fact that they would go dig up an incident that was over 20 years old, just to be able to throw something in the face of an opposition Dail member, openly smacks of unprofessionalism. The attack was part of a now drawn up, 18 page document that has been compiled in order to do one thing – attack opposition for daring to raise modern issues that need to be addressed. 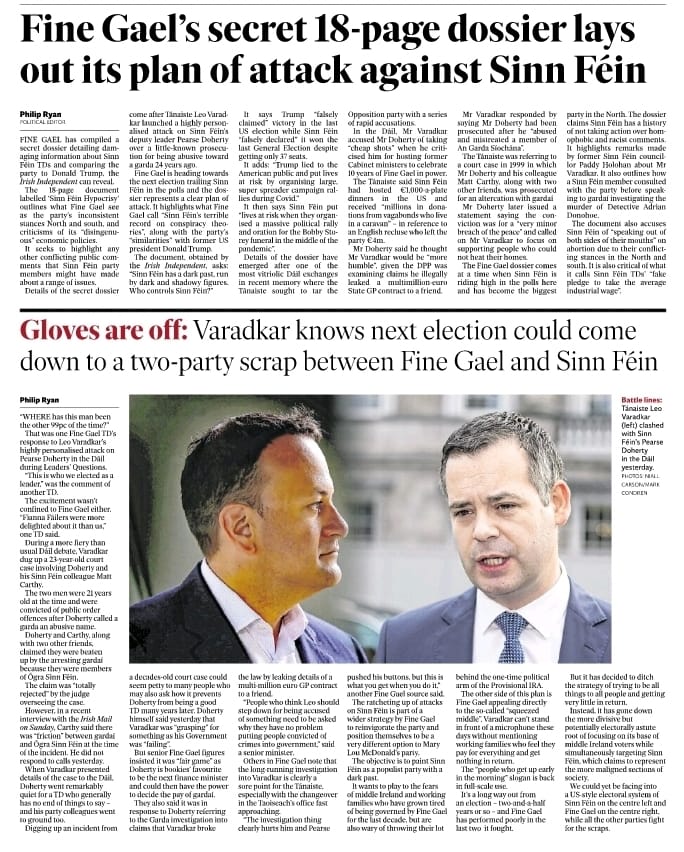 Fianna Fail, Fine Gael and the Green Party (who repeatedly, spinelessly stand by, allowing the continuing activities of the other two) continuously stand up in the Dail and then lecture others about their questionable activities. Now, it has to be stated, sometimes this criticism is merited. However, Fianna Fail, Fine Gael and the Green Party – the current Ireland government – are a massive prime example of the “Pot calling the kettle black“. They are judged to be, by a still increasing many people in Ireland, to be just as bad – if not worse!

Fianna Fail and Fine Gael in particular with a long history, are up to their own necks in

The above is a mere scratch of the surface of their continuing dodgy and often deemed, criminal activity. Much of it has been detailed in previous posts on this site. As of June 20th, 2022, they are still up to no good. They are openly blatant about it – all the while lecturing others during their ‘muck throwing‘. Take for example, their latest announcement about sudden added-on addendums to legislation they are ramming through the Dail.

BACKGROUND HISTORY. Previously, Fianna Fail in the last year, decided to declare themselves as a “charity“. Their audacity knew no bounds. They – a long registered political party – just though they could do this without any notion that in many ways, it was just morally wrong to begin with! In legal terms they were attempting to bend current existing laws – in order to only see that they financially gain, in their own massive interest. No one else’s.

Having done this, while then been nationally mocked for their ‘grey area‘ abusive law antics, they then proceeded with their bending and exploitering of national charity laws, to conduct a political party raffle. They though they could get away with this lock, stock and barrel. They didn’t give the matter a second thought. All this of course, had to be ok’ed by the top ranks of the party – who it seems, had no qualms in allowing this activity to continue. It did. Well, till outsiders noted what was going on and said “Hang on a damn minute!” and then rushed to the Dublin Highcourts to hold Fianna Fail to account. Quiet right too!
. 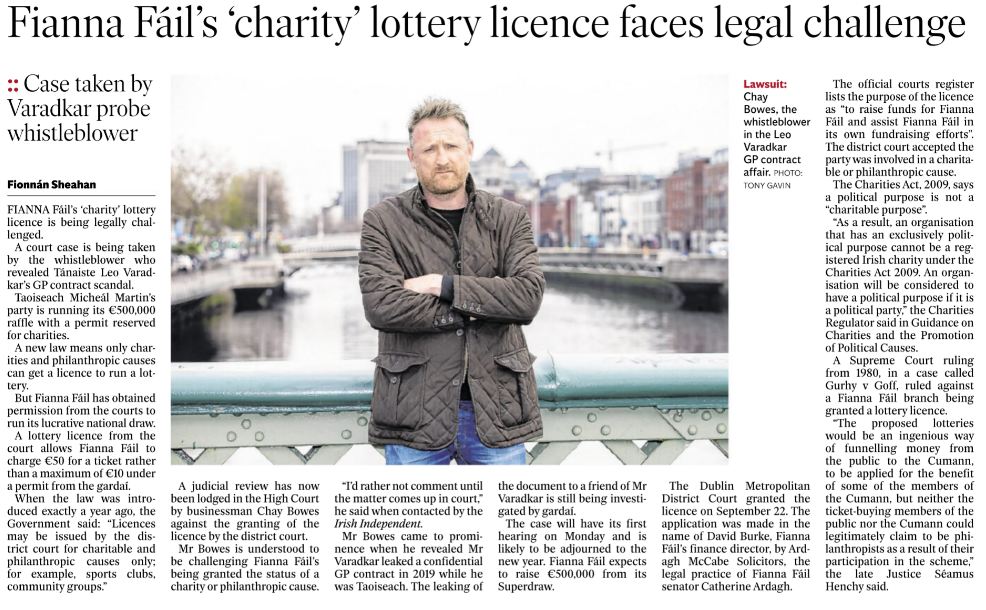 Suddenly, the Fianna Fail party found they were in a legal crises. It’s party leader, for obvious reason, likely realised that this whole matter could further blow up in their entire faces. He could have been sequestered to appear in court, to testify as to why he was allowing the matter to proceed! If the Green Party, one of their Mafia coalition members, stood by it’s election time promise to be a watchdog over the other two parties, then the scandal raised a chance of even bringing down the triple party government. That could not be allowed to happen.
.

Fianna Fail in quick fashion, over night, cancelled the raffle – thus effectively halting the legal action that was being taken against them.  It was a legal case they stood absolute zero chance of winning. They were openly abusing the laws of the land, regarding what officially was a “Charity“. Genuine charities that had long worked hard to get that official status, were enraged and insulted by Fianna Fail’s audacity. When the raffle was then quickly scrapped and many ticket buyers got their money back, the matter should have ended there but as things have turned out, it didn’t. Far from it. Fianna Fail’s big money greed aims, weren’t going away. They just remained deliberately buried for a time, until their latest created scandal could blow over.
.

In the last month, after many discussions, committee meetings and legalities formulated into legislation text that was to be later be signed off on, it was last minute announced that charity laws were to be updated (further at the last minute, bypassing all the other previous analytical decision processes – and thus bypassing a democratic process) with a further addendum just before the matter was to be voted on by the Dail. The last minute addendum is to allow political parties to now be excluded from standard applied charity laws.
. 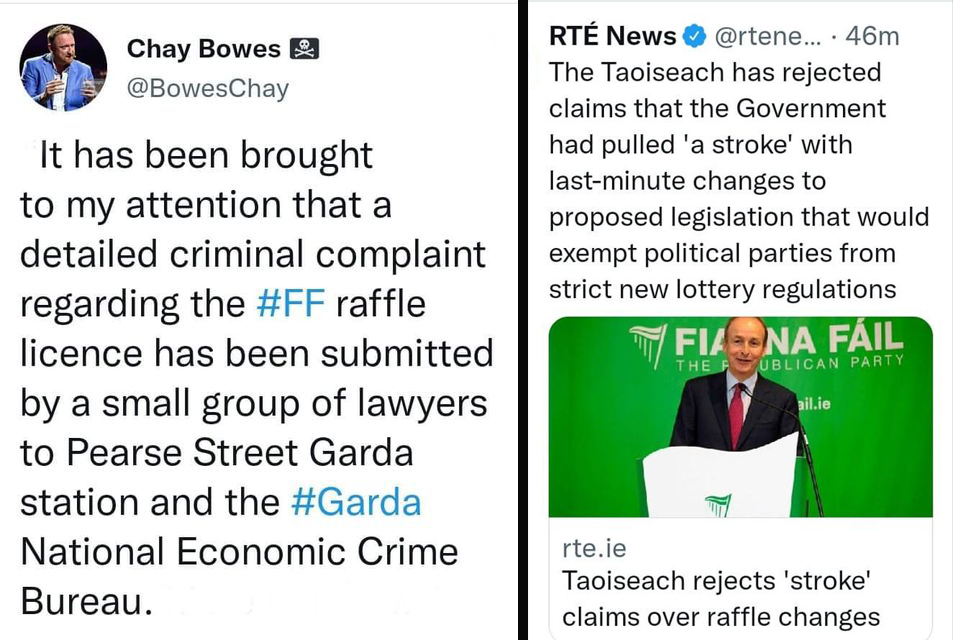 Fianna Fail and Fine Gael are ‘conflict of interest‘, making themselves further ‘untouchable‘, more elitist and now changing laws of state so they might massive personally profit where many others cannot.

As the Dail to date, remains majority seat controlled by the triple party Mafia, they know there’s bugger all chance of their antics being stopped by any vote taken – if the Green Party remains bought off, onside with it’s coalition partners immoral and greed antics while staying silent and morally spineless! It’s currently thought that again, the Green party – care of leader Eammon Ryan as it’s current top face – will keep it’s mouth shut, again look the other way and again, go along with the antics of Michael Martin and Leo Varadkar. Some useless political “Watchdog” the Green Party turned out to be? 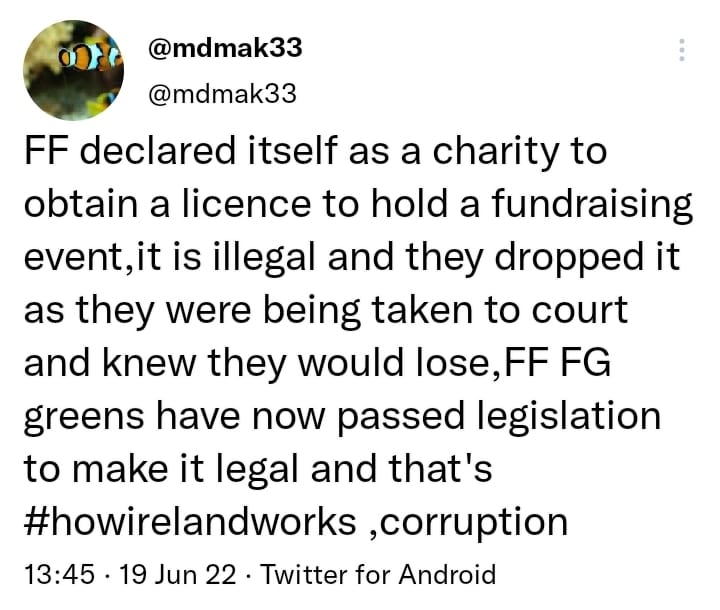 As of the 20th of June 2022, Fianna Fail and Fine Gael plan to still proceed with their deliberate last minute sneaked in, legal changes – all so that they many personally gain. Not the national public gain. No, overall just themselves. Let’s be clear about this gain too. If they advance their own changes of raking in more money, this will further widen the gap between themselves an others in opposition who don’t wish to run gambling operations in order to geed profit. The Fianna Fail and Fine Gael proposed legal changes will see that more of their own members, will by greater financial benefit, be more able to personally profit in time. Using gained bigger money, the two main parties will be able to buy more radio and TV air time, buy more local newspaper space (from newspapers that might then be afraid to ‘bit a hand that feeds it‘ – so might further lay off political criticism material being published – and the public then learns less truths). The more well financial backed, will of course benefit – as they are better PR’ed to the public – thus gaining by election, more mega paid, perked and pensioned jobs. The Fianna Fail and Fine Gael elitists will grow in number. All thanks to their parties gambling activities – by their exploitation and corruption of charity laws.

The public is not supposed to be more aware of all this and the knock-on implications. RTE is vastly doing it’s best to stay away from this next scandal. Even local media around the country are doing their bit by their own continued silences. The only ones speaking out about the latest dose of political corruption, are those that are trying to greater educate the people of Ireland to the continuing questionable antics.
. 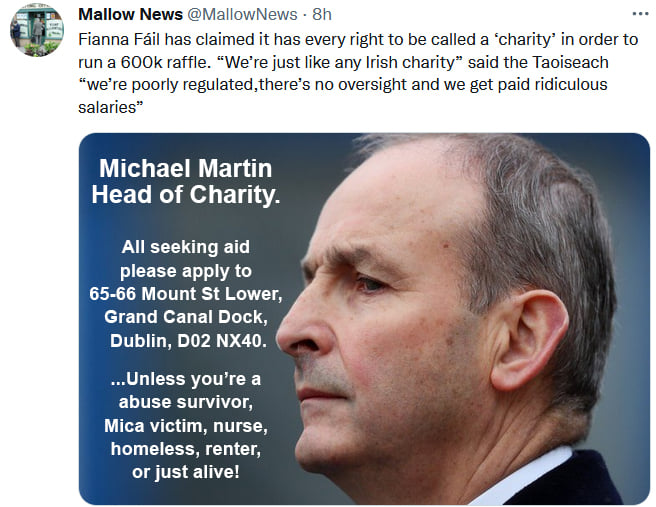 There’s also an ironic factor to all this too. Fianna Fail and Fine Gael – along with others – have been advocating previously that citizens should be always cautious with their gambling activities. They back the likes of Problem Gambling (LINK) and Gambling Care (LINK). They even government fund the likes of The Rutland Centre (LINK) who deal with such problematic matters. Then, as of 2022, Fianna Fail and Fine Gael up their own gambling activities. The irony and also double-standards, you couldn’t make up – but they certainly can it seems.

.
In the aforementioned sections, Fianna Fail has been seen to lead the latest ‘Conflict of interest‘, immoral charge regarding gambling – but to be fair, Fine Gael is no slouch either in this area. They have been up to their own questionable antics. Without further boring you, I will leave these news links HERE and HERE for the interested, to learn more that the mass public are not supposed to see in bigger picture – if Fine Gael can help it!
.

.
More irony? When opposition Dail members try to do the EXACT SAME THING as Fianna Fail and Fine Gael, what then happens? They immediately become involved in a Garda investigation. The untouchables that are Fianna Fail and Fine Gael, are allowed by Garda do what they like – no investigations whatsoever – but yes, there’s a crackdown on political opposition. News LINK. Two things to note (again). 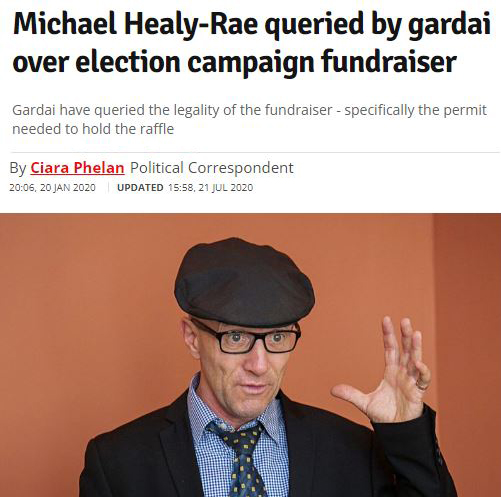 .
Will opposition that wish to hold their own gambling, fund raising raffles, now call the Fianna Fail and Fine Gael party out for their double-standard, hypocritical, law exploiting activities? Some will – but it’s also expected that SOME WON’T. Why? It’s obvious. Some will not further expose others questionable activity because their underhand, elitist law changes will later help to fill their own opposition pockets too. So, it’s expected that some will remain silent or at least politically ‘pull their punches‘. The political corruption within Ireland, rolls on. “Old politics” alive and screaming. It’s still #HowIrelandWorks – for an elite some.

All the above and much more (that still remains #RTEcensored), is an inditement of how morally and possible legally corrupt the parties of Fianna Fail, Fine Gael and the Green Party (through inactivity and silence) remains to date, as of year 2022. Any representative of these parties, elected or supporter, standing by these parties or for these parties, are openly, slap in the face, standing by the political corruption they are doing. They too are aiding and abetting possible corruption activity.

They are making laws so they can PERSONALLY profit. It’s conflict of interest, top level corruption appearing to be led or backed by Michael Martin and Leo Varadkar. Backed in silence and inaction by a totally useless “watchdog” that calls itself the “Green Party”. Meanwhile, hypocritical lecturing continues unabated from the usual culprits…
.
END.