As power and gas prices rise at alarming percentage jumps and with increasing regularity, all this and other price increases are not only having an effect on work as well as home.

Meanwhile, businesses will have to up their own prices – which means they might sell less – thus will also put pressure on further ability to pay bills including outstanding wages, rates and more. Less staff being needed or able to be hired.

Shops will be closed on more quieter days. Bars might have shorter opening hours. Offices that require heating five days a week are looking at more days off. No heating and power on at all for more days. Workers at home, will then be using more power while at home. It’s all about passing on of costs and it’s knock-on effect. 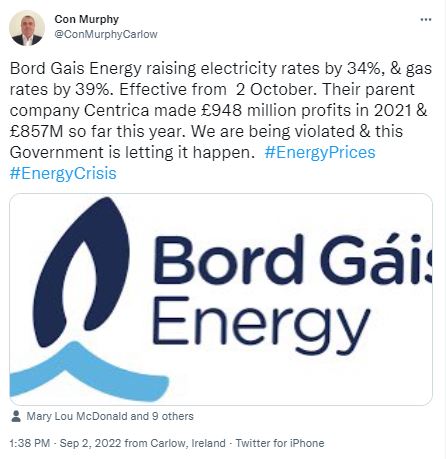 Governments including Ireland, are still more looking to address the effect of what’s happening rather than the actual cause. It’s clear they need to re-shift some of their focus. However, even if they do that, any resulting attempt to address the underlying cause of dramatic price increases, will not see quick solutions found or then applied.

Truth, there is not yet, a light at the end of the (high bill) tunnel. Such as been the lack of focus and efforts, at the moment very few can see a light as they even start to further enter any tunnel of dark times ahead.

Put simply, governments must start aiding – or crack down – on gas and power businesses far better – while the top heads in same must do their bit also, personally in regard to daft top high wages, sick high profits and own physical efforts.

While individual states better look after their people, the states united, must also better confront the big companies and say “Enough is enough”.

Address root causes better and the knock-on effect can potentially turn more positive than negative. So far, that’s not been even given a chance to happen – which in turn means we will all continue to pay a price. A continuing, increasing expensive one.

One far less known bloke, me, in Louth can see this. Why can’t the heads of many states with their large number of high paid advisors, see the same?