The country will awake to the news this morning, that the government is to try again subvert the rights of the nations people.
.
Currently there are almost 750,000 households where smart meters have been installed. All of them could be put on mandatory new ‘time of use’ tariffs.
.
However, there are legal rights protection issues. For the moment, customers MUST give their consent to the imposition of these tariffs as smart meters log household activity, and only around 10pc have made the switch.
.
The government self-adopted agenda, if they get away with it, will mean another state imposition that will then see energy prices hike up to 50% between 5pm and 7pm at night. Just when most people are cooking, in many cases, after returning home from work.
.
Smart meters, if not already installed, could also futher be tried forced on the rest of the nation through coercive, already fine tuned, practiced methods, used by state departments to ultimately get what they want – along with the government’s price hike desire.
.
Energy Minister Eamon Ryan said he was talking to the Data Protection Commissioner about dropping the requirement for consent. In other words, your rights of consent, the government wants to undermine. They again hope to pressgang 750,000 households into gaining even more higher charges. 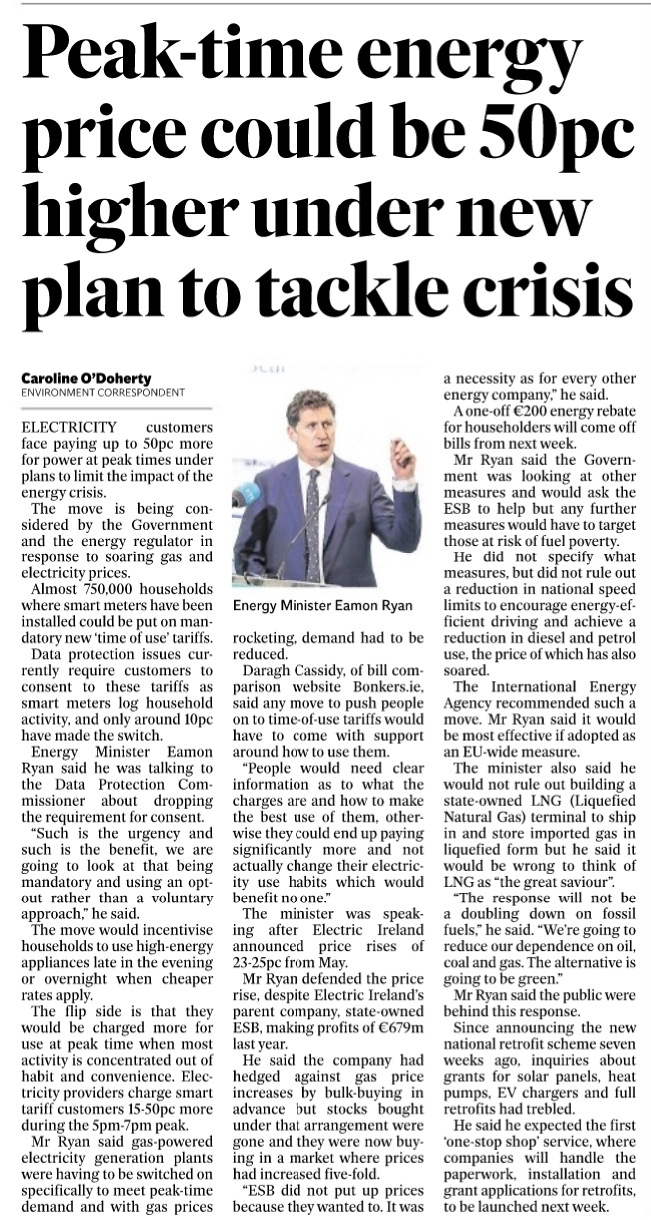 .
Those who are better informed or not living in denial, will be aware that consecutive governments of Fianna Fail, Fine Gael, Labour and Green Party, have previously and still do, pressgang Ireland people already in many ways.
.
From minimum wage, job exploitation practices imposed through state schemes people are told to take, through pressganging people into the #JobPath racket and similar (private companies further subverting human rights, bullying and further aiding state department money stealing), though undemocratic actions placing the nation into treaties and EU agenda without referendum consent sought, etc, the four parties each have a history of overriding human rights. This overriding, is to date, very much #RTEcensored from being reported about.
.
Now, the government wishes/plans to, again deny people their rights regarding their concent needed, as they further plan to hike prices even more – just when prices are rocketing upwards already! Unless people wake up from too much complacency and national protest, the usual parties will get away with it all yet again.
.
The government will PR pitch that once again, their subverting of consent rights, is for the good of the nation – while not good for you personally – but once again, its another drip by drip, further quiet suppression attack on once held, remaining human rights. Rights recognised in an international, Ireland signed charter, that the government plans to override while they are also chipping further away, bit by bit, at your personal rights.
.
The complacent – and let it be conjected, possible stupid people – continue to meekly except it all – again!
.
It also must be pointed out – if they also get away with this next planned move, what’s next after that? It’s now what they regular do. It’s once again, a human rights aspect regular not reported, or indeed, investigated by biased, government supportive media!
.
The ultimate cost upon you, will be in greater financial terms and further weakened human rights. That’s all. Carry on, move along, there’s nothing here to see?