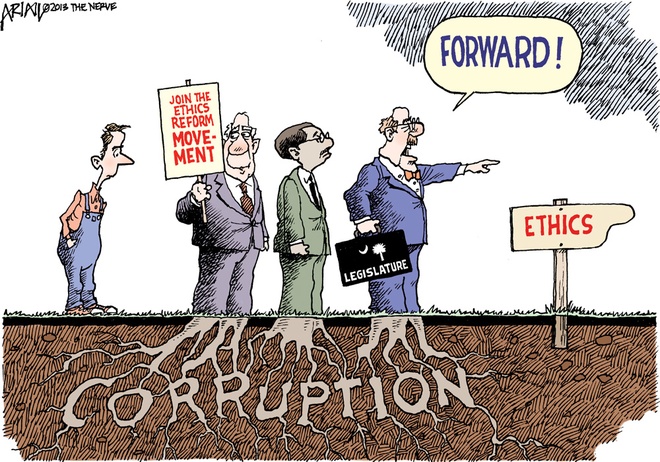 No matter what side of the Dail a persons loyalty resides, they would be foolhardy to say that corruption doesn’t still exist. It does and in every country, not just Ireland. The debate will be to what degree! In Ireland it exists. Many espouse that we have just got more professional at it. As a guest on the RTE Late Late Show stated “It wasn’t men in tracksuits” that ruined the country, it was “men in suits”. Others and I agree.

Another truth is that the corruption still existing, is systemic and within our very systems at all levels. Only a stupid blind fool would say different. Many of our state rules, agreements/contracts deliberate contain loose terms such as “sufficient”, “adequate”, etc, vague measurements of non-quantifiable targets set. In other words, in court room, opinion words put down in document writing, has to be argued over – where it should be very specific from the outset.

I mention the above as one example of how elected at top ranks of government and their political appointed friends at department levels, are able to use rules as loose as possible, to then seek out further personal advantage for themselves, family, friends or clients. There are many ways they play the system and they share such ways between each other.

Members of the Dail currently list their own business interests through a list they each contribute to. Found here. This list however, doesn’t take into account businesses, shares, property that has is possessed by married partners, unmarried long-term partners, fathers/mothers, grown children, etc. It doesn’t list items that have been transferred quietly to same list of people, besides also business mates. It doesn’t list when those transfers took place and under what circumstances!

As it stands, we have elected ministers that are landlords that are creating, then voting for laws to enhance the landlord business. They are whipping their fellow TD’s to support the same policies – or else! The equivalent of work bullying. We have TD’s who are pub owners creating laws to enhance their own drinks business too – while creating laws to cut out cheaper outlets that undercuts their line of business. Again, they tell their fellow party members to vote one way – or else demotion, being snubbed, allowed not run again. There are many open and subtle ways that pressure is applied.

We have had ministers who were gambling bondholders getting to create bondholder policies and then deciding on behalf of the nation if to burn bondholders over their gambling habits – or if to get the nation to cover their backside and ensure they collect public money to the tune of Euro Billions.

Heads they win – tails you lose.

What we have here is open, blatant “Conflict of Interests” regarding many policy matters – and the public in some way or other, consistently coming off the loser while the main culprits ensure their own (and family/friends) gain! In other countries this type of activity is completely illegal. It is seen and treated as “Insider-trading”. Elected taking advantage of insider knowledge, power position and opportunities that they seek out or are given, sometimes over unrecorded meetings, meals and drinks, etc, held unofficially, quietly behind often closed doors to the general public.

We have TD’s consistently telling the public to obey all the laws of the land, pay all debt’s owed and pay all their taxes – including the still illegal ones imposed (VRT anyone?) – while at the same time, breaking many laws themselves (and even when caught, allowed to get off), themselves leaving others high and dry when not paying their own debts (and still incredibly lecturing others on the topic) – all the while continuing to uphold illegal laws, allow departments to continue breaking laws, constantly turn a blind-eye to reported illegal activity, keep their mouths shut about it and remain unwilling to ensure proper Garda investigations are properly instigated.

We have had night-time carpark secret meetings, attacks on not just whistle-blowers but their family also. We have had too convenient, too many mobile phones going missing. We have had too many people refusing to hand over information or even encryption codes, so that vital evidence is then denied – and the questionable connected to it all, are allowed walk away from even a further investigation, never mind subsequent charges!

This is the “tip of the iceberg” stuff. Your local and national elected know it’s going on. Your local party members, be it a Fianna Fail cumman or Fine Gael, Labour or other local party branch – they are not all stupid, far from it. Many of your next door neighbours know who’s involved. Some know how exactly some are involved.

An incredible part of it all is not only that corruption is still going on but that it’s being going on so much, the participants involved, has too many convicted that there is no point in even trying to battle against it and create a change of culture – never mind attempt to call for greater, tighter legislation to start modern tackling it all!

I’m stating the obvious. I’m stating something I have repeatedly said on Facebook. It’s frankly time for better. (#TimeForBetter)

Over the next few week and months I will be addressing these issues and more, through my Facebook page and Rudd website. The past and present situation cannot continue. Many know this. Ireland needs to build a new resistance to the ways of the past. Our future and that of our children’s, depends on it.

NOTE: For even sticking my head up and daring to expose, never mind further challenge, aspects that needs to be urgently addressed, I’m aware I’m further sticking a target on my back. We cannot continue to run from things however. We have to start taking better stands. I cannot call for it to happen if I don’t do it myself. So, here I am…