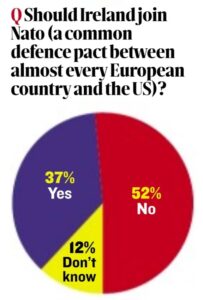 Sunday Times Poll – March 6th 2022
.
.
Certain parties wants us even more signed up to military political pacts. Their sales pitch is that such pacts will “Protect Ireland from damage or attack” of any other outside waring nation.
.
Let’s seriously be real here.
.
1. We are on the Western edge of Europe/EU. To our own West is just 4,00 miles of pure sea.
.
2. We are not exactly enriched with enough gas/oil to make us a nation worth invading.
.
3. In the likes of #NATO or out of it, if any target in the UK alone gets hit, as they are a NATO member or they get hit regardless of NATO;
* We get the radiation clouds.
* We will get the radioactive dust.
* We will get the nuclear winter.
* NO NATO PACT is going to protect us from all this.
.
Hell, if Sellafield (previous called “Windscale” but PR renamed due to too many previous radiation leaks) gets hit – and it’s likely a target – on the West coast of the UK, the East coast of Ireland where I live, is gone. Bye bye. Sellafield is right across from me directly. I will be dead. I will be the lucky one. I will feel sorry for the remaining living that will then have to go through various forms of nuclear aftereffect hell! Same result if other EU targets get hit.
.
Does anyone really envision tanks and more rolling up on Irish beaches? Seriously? Come on! …And if we were even invaded? You can drive from the East of Ireland to the West (or other way) in a day or even less. We don’t stand a chance. No insult to our signed up brave Irish military – but against a world superpower attacking us? Let’s be real.
.
By the time the rest of the world even reacts, it will likely be already “Game over” for Ireland. This is before we even get to a nuke homing in on Shannon Airport. What’s NATO going to do there to protect us? Stand on it’s runway and wave a copy of a NATO pact? That’s not going to stop any already incoming missile.
. 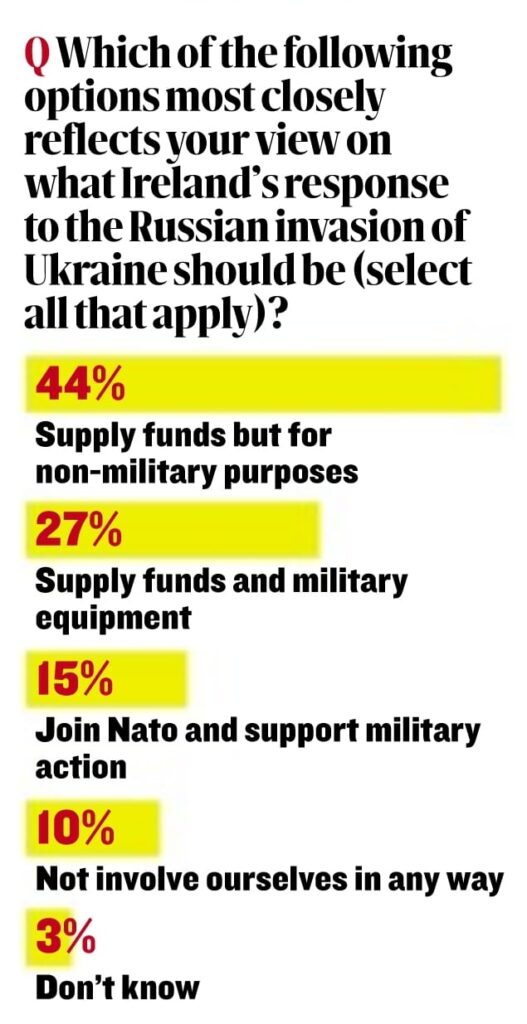 .
So what will NATO really do for Ireland? Seriously! Two things.
(A) After we are invaded or more likely destroyed, the remaining few left to suffer nuclear aftereffects, might get some comfort that whatever military that remains of NATO – who would be also attacked worldwide at the same time – might embark upon revenge attacks? I’ll be dead. Revenge is not going to matter to me. I will be well dead, atomised in fact.
.
(B) Joining NATO will mean having to seriously cough up even far more Euro Billions. Money that could be far better kept at home. Hell, if we are going to be invaded or destroyed some day, before that occurs, can we not use those Euro billions instead to make life in Ireland as best possible before we all go up in nuclear smoke?
.
I’m open to be wrong but I feel that joining NATO is ultimately pointless.
(C) If there is a wider war and we are NOT in a pact, it’s likely we are all gone anyway giving that nukes will be involved.
(D) If there is a wider war and we are in a pact – and we get unlikely invaded but either nuked or destroyed by such aftereffects, never mind targeted anywhere, no NATO pact is going to save our backsides. We will be likely doomed already.
.
We have wasted enough Euro Billions a year. Already to the tune of €3.5 Billion a year now. #RTEcensored of course. Care of a #PESCO setup you and I got NO DEMOCRATIC vote on. FF/FG/Labour just signed us all up to it. In short, we are already screwed and joining another setup, NATO, is not going to make a further blind bit of difference. We will be just out vast more money that should be used for getting our own country in proper order.
.
You are free to disagree. 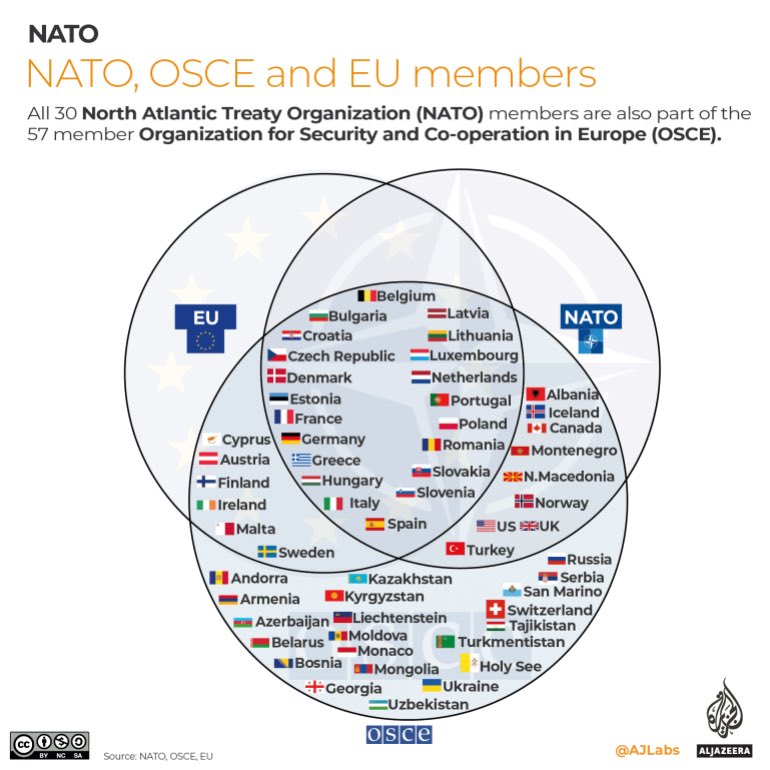