What A Difference A Day Makes, Just 24 Little Hours… (as the song goes) 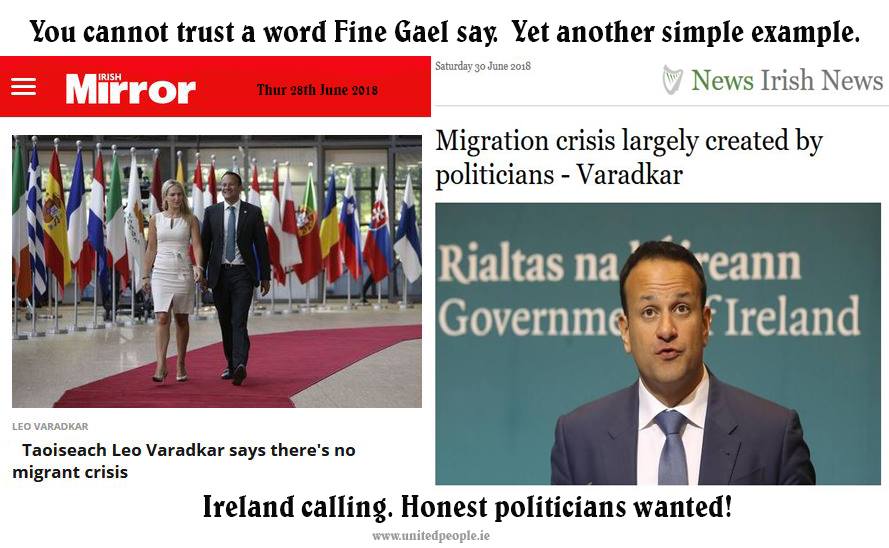 Many people have seen odd behaviour of media and elected they favour, over the last ten+ years. To some extent, in Ireland we have come to expect it. Things have got particularly ‘odd’ to say the least since the days of the water protests. Since they started up and the mis-reporting of numbers in attendance, the noncoverage of many of the protests – besides open blatant lies being aired, Irish people have lost greater faith in Irish media – especially RTE news reporting. 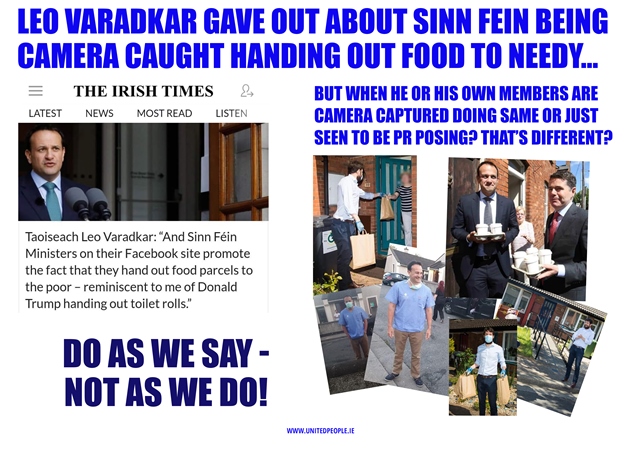 Thing have got so bad regarding the trust that people have in RTE reporting, that RTE has recently had to start its own media PR effort with adverts actually espousing that you can trust RTE news. Coincidence? Only a fool would think so or try to make out such. In fact, do yourself a favour. Go to Facebook or Twitter and look up the hashtag #RTEcensored. The amount of stuff that has been either downplayed, misreported or often, not reported at all, is absolutely incredible – but the evidence is there for all to see. 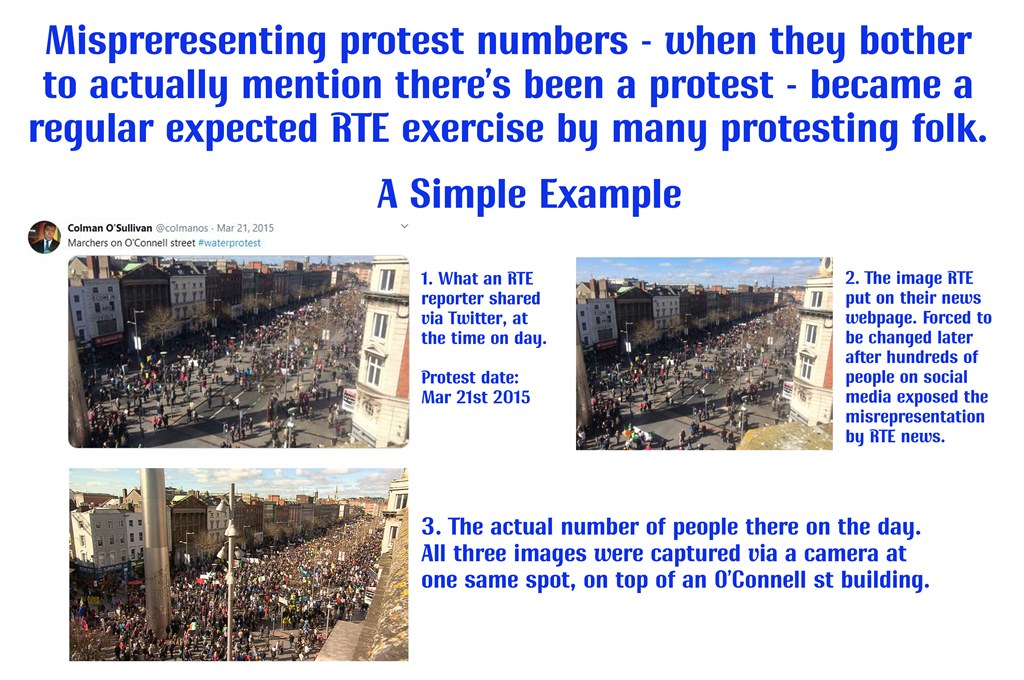 RTE however, are not the only guilty culprits of pulling stunts. Far from it.

Over this last weekend, there was some very obvious examples of what is now standard forms or non-reporting or downplaying events. Why? I will suggest a reason later – but first, lets look at one example.

If you watched RTE news or read certain Irish papers that are more Irish owned and managed within Ireland, you would see the likes of the following article. 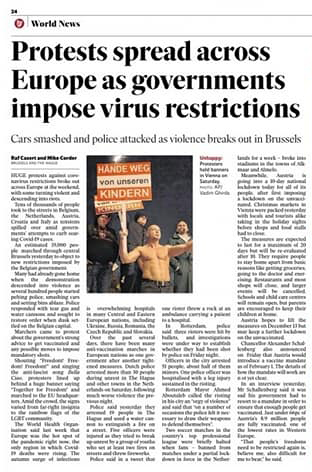 Now, credit to the writers of the article. They present a lot of text and some details. However, look at the actual picture. ONE protester – as the article states “…As violence breaks out in Brussels“.

Anyone looking at the article, reading that there have been protests in Europe, might be left (deliberately?) thinking that it’s only general small stuff, lone protests and isolated stuff! However, in other papers NOT Ireland based and certainly often not printed in Ireland (where they might be further under political influence), those papers portray a different image. What’s below, is just one example of many out there beyond Irish media… The article below, open mentioning more places, appeared on the same day as the article above. 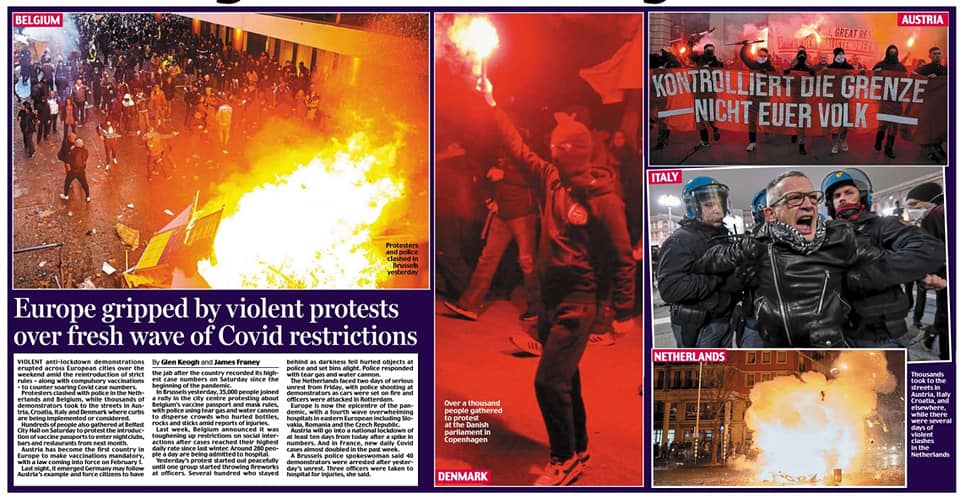 Indeed, if you go to the bother of looking at international news sites, again you will see often that Irish media regular fails to fuller show – or never show at all. In short, lots of mass protests – attended by a hell of a lot more people than RTE and other Irish media are letting on. The evidence is out there to be found on this. All it takes, is the non-lazy to go view it. 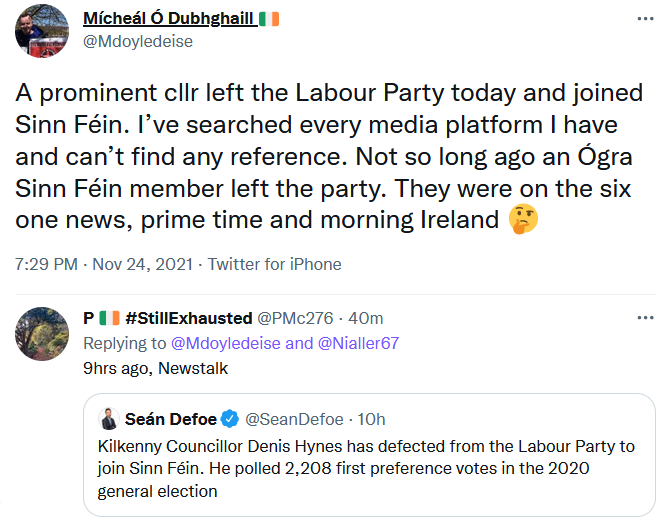 Here, we must give credit where it is due – to Newstalk. They at least, gave this matter some publicity. Others at the same time? The silence “was deafening” as the saying does.

NOW – Let’s be really honest here. If a member of Sinn Fein left that party and joined another party, do you really think that one outlet alone would just be mentioning that event? Be honest – even with yourself! I suspect – and it’s opinion – that RTE, The Irish Times and the Independent newspaper would be on that flip-side of a story for days, running as much out of the matter – like trying to squeeze every drop of juice from it – as blooming possible. The truth is, that this sort of thing has happened previously. It often does.

A party or person of them, in opposition, is accused of bad antics or they have taken a ‘hit’ in some way, the media is all over it. When same opposition parties actually do something good – you know, like fight the #JobPath scandal that still being media buried or when another opposition party does something about insurance rip-offs? Certain media give it barely coverage at all. As little as possible or in the case of RTE, no reporting on a regular basis. If a FF/FG elected person did same? Would it be a different story? Again, be honest with yourself!
.
Another example?
.
.
Paddy Cosgrave. Context Is Important.

Background info: Mr Cosgrave is a I.T. man that for a long time directly begged the Irish state repeatedly for assistance to ensure that an annual international technology conference, could be held in Ireland. The result was that the usual shower of ministers (yes, from the usual in government parties) kept putting him and the matter off for over a year. The evidence of the repeated efforts by Paddy and his team, is out there in the public domain for all to read. DOCUMENTS LINK: https://t.co/BV8JVve7pJ

Paddy’s company offered free serious concessions to the IDA to help the state and it’s people. The doors of government remained slammed shut in his face.
. 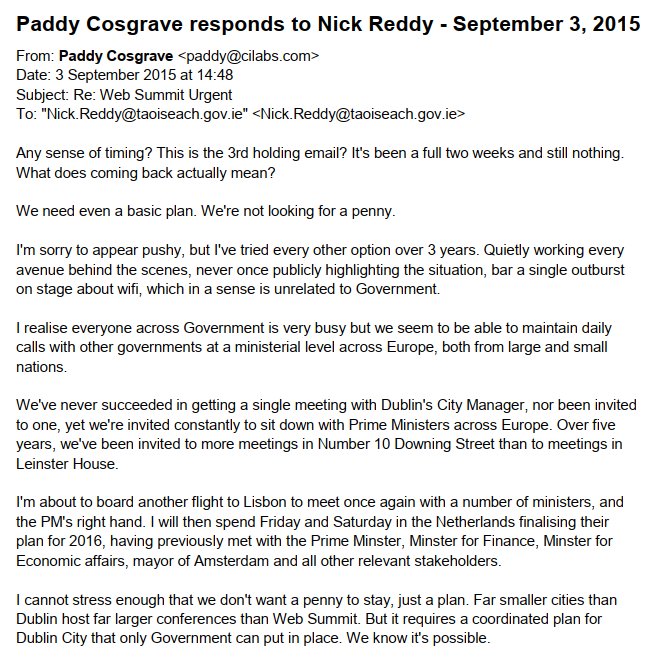 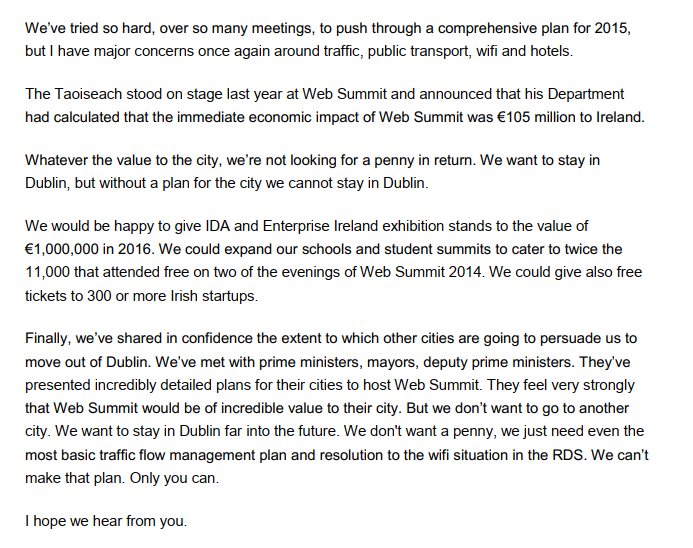 Up till recently, certain particular media have deliberately regular ignored Mr Cosgrave. The rare paper give him a brief mention buried in a small paragraph, pages deep in an even rarer article. Why? Opinion: so to not further publicise some of his often Twitter posted explosive items that shows how top level rotten our current government is? Feel free to pause the video below, in order to have more time at reading the content.

.
…But why has Paddy become outspoken more so? Again, opinion: Maybe in part, because Fine Gael elected – and those from other parties willing to still stupid back them – have thus let the nation down? In his case, an I.T. summit that has now gone from 5,000 people attending to 50,000 – that now is bringing to Lisbon, Portugal, half a million Euro for that state willing to do what the Irish state would not – facilitate the I.T. summit.

Yes, Paddy and his team might have cause to be peed off. They wanted to give Ireland a serious international platform for the world to annually see – and Fine Gael plus enablers, totally fecked that up. So, yes, there might some anger towards those that have let not only Paddy’s people down but an entire nation of citizens!

…However, like I said …Certain particular media have deliberately regular ignored Mr Cosgrave. That was until he stage introduced two people that did their own exposure – whistleblowing – of a national crime and Paddy mentioned the organisation that also dared to tell some truth. Paddy was a further messenger.
.

.
Suddenly,  exposing Leo Varadkar more so on an international stage – someone – or an elite in Ireland, didn’t like this.  The matter after it happened, was barely reported on TV. RTE news? Deafening silence.  Other government favouring media outlets (no surprise) decided either to barely mention this important event surrounding our still next Taoiseach – or didn’t mention it at all. Total censored.

Instead, where there was once continued silence regarding Paddy Cosgrave, now they decided to write about him far more so – by coincidently creating frontpage attack pieces. Suddenly – after years of being ignored – certain media have decided to target and taint him as a possible ‘devil incarnate’. Paddy was suddenly made frontpage news, big time…
. 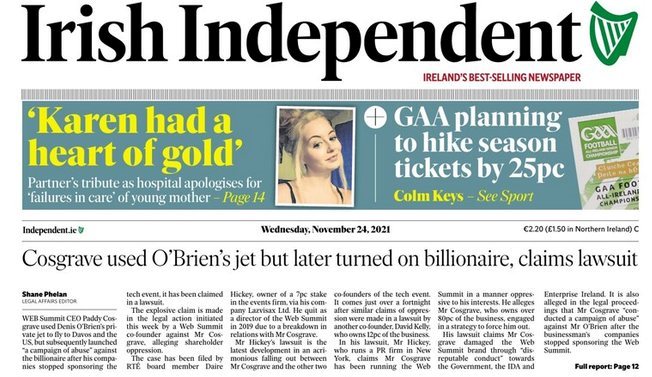 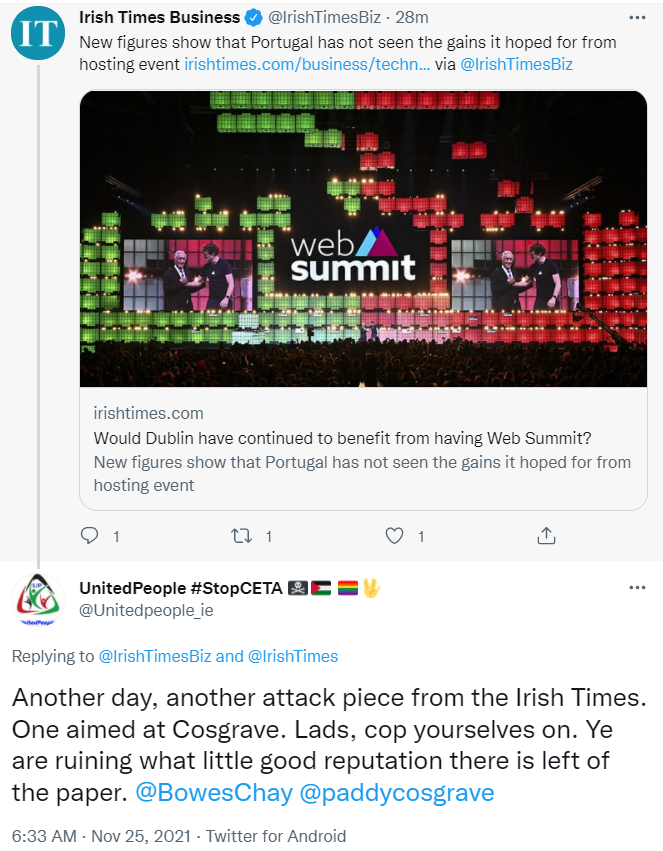 .
Indeed. The Irish Times has been so keen to attack Paddy now (after so much silences when he wasn’t exposing rotten government), that they appear to be even willing to risk breaking laws themselves regarding putting possible court material/evidence out into the public domain before it even gets to a courtroom – where nearby it’s been already officially lodged but not seen by a judge yet! This might be referred to as “preadjusting a court case” before it even gets a chance to be heard? If it is, it’s indeed highly illegal. 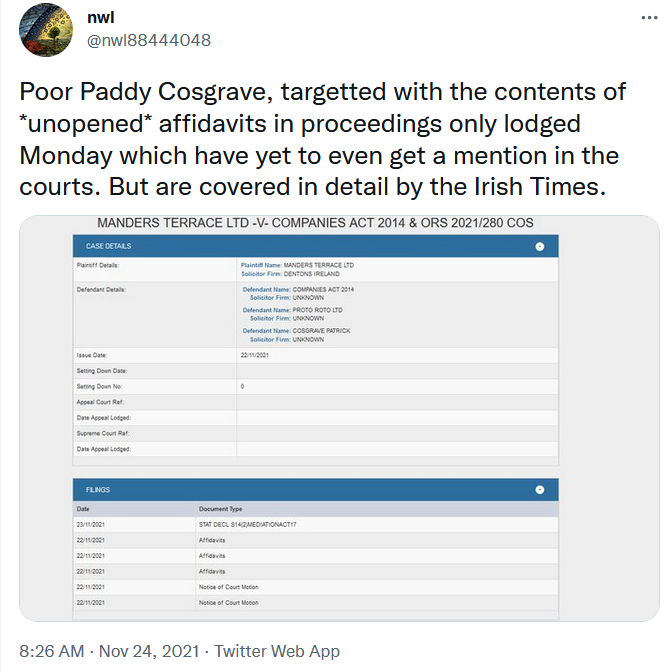 .
As the saying goes “If they can’t attack the message, they will attack the messenger“. The saying has never been so truer than today. People just have to open their eyes wider to see it, right in front of them.

Let me go on record here at this point. I don’t know Paddy and I have no other connection to him of any kind, whatsoever. I’m just calling things as I see them.

So why are some media outlets, for simple example, playing down protests or often not even mentioning them? Again, one persons opinion. Mine. I suspect that biased media, the unofficial mouth pieces of certain parties, don’t want Ireland people to get any similar ideas about carrying out their own mass protests. Seeing them happen elsewhere might just invigorate more at home to do similar?

Good gawd, Fianna Fail, Fine Gael, Labour and the Green Party can’t be having that! People getting further notions after seeing others protest – that they could do the same? Yea… Let’s report any protests as little as possible – those either at home or away.
.
Conclusion.

Many times previous I have reported unreal – but all too real – questionable antics of national and local media. Hell, Even I’m ignored by by own local radio station – even after appearing at the Oireachtas with a mountain of abuse, details of mass financial fraud, department stealing, data laws broke and other crime evidence, after starting up a national Dail registered political party, putting that party as a world first on VR facilities and much more. …But forget about me – this is about a bigger picture beyond my own personal issues.

It’s clear to the non-blind that a portion of or national and local media are possible questionable and biased to say the least! One of the founding aims of UnitedPeople, the party I founded, is to vastly improve our media laws so that such biased antics can be more addressed. The antics of media are clear to be seen by those that also take their blinkers off. Sadly, they won’t – because they don’t want to hear or see further truths. They are comfortable in a partial corrupt society – and some of them are also up to their necks in it too.

One thing is for sure. It’s time for better to emerge.

P.S. I am very much aware that at some stage in the future, it will be my turn also to be big time targeted by possible media for speaking out. However, when they attack, it will be for some other reason they can cobble together – then also try blow up out of all proportion. It’s what they do these days if you are not in their favour or speak out against corrupt people or parties. It’s #HowIrelandWorks currently. 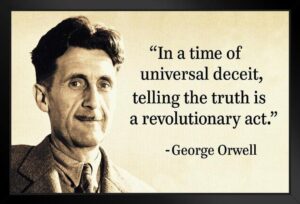