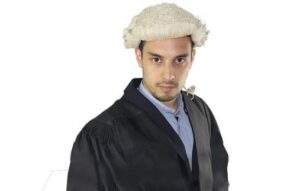 .
Did you know that every day the Dublin Highcourts are in operation, they are openly mourning the death of Charles the Second in 1685?
.
I do not jest. The daft black capes of barristers, along with powdered white wigs, were first worn upon the death of the previous British Empire King. 400 years later the courts of Ireland have in total craziness, not been able to move on. By still wearing them, they still mourning for what is now, a long dead foreign king.
.
The refusal of some to change out of the daft wigs and Dracular style, fancy dress garb, comes from self-adopted, still maintained, airs and graces. A good few consider themselves an elite class of their own and wish to retain their pointless garb to help others see that they are a breed a part and as such, should be held in a form of veneration.
.
That said, there is a younger bunch of Dublin barristers that do indeed think, what they have to wear in courts according to outdated court rules, is totally stupid. They want all this elitist crap gone. They want to wear standard professional outfits one would expect to find in a decent serious office – not the centuries old stuff!
.
I mention the gear they are wearing deliberately. It’s one clear sign of many that exposes just out of date our Irish courts are in many ways. Ways, I should again point out, dinosaur thinking judges are still refusing to address.
.
In the next few days, weeks and months, in Facebook posts (LINK) and through my family website, I will be going into great detail about not only what is wrong with our court system in Ireland but also in specific detail, proposing how to address many matters in pursuit of positive progress.
.
However, I am not stopping there. I shall also be going into great detail on many matters, offering hundreds of possible positive suggestions for a better Ireland. It’s easy to give out – and I do too – but it’s important to also try provide solutions also. This, I intend to do more, moving forward.
.
It’s very clear by the antics of our current corrupt government and wrong doing courts, that real change is very much needed – very much so from others seeing as four political parties won’t provide the real core needed changes that’s long overdue.
.
I hope you will continue to keep an eye on my posts. Things are going to get more interesting and more specific.