The latest news that Mr Holohan is not now taking up the Trinity professor position, has left still open questions about the whole matter. In fact, it has raised even more now.
.
Individual government TDs along with opposition are asking how could the likes of Stephen Donnelly and even the Taoiseach be completely by-passed in astounding procedure apparently used by Robert Watt. Could one man do so – and be allowed to legislative do it lawfully? Are there clear accountability legal changes drastically needed, in order to address what appears to be a gaping legal hole that by supposedly current situation, gives one person extraordinary powers to sign off on matters?
.
Questions are still being asked about the €187,000 wage that was to be paid for the invented position. Some reports now state that the annual money was to be paid by the Department of Health via research funding, for a college position. How was this legal possible? If such huge funds did exist in the Department of Health for such funding, where did it come from, if not from the taxpayers of Ireland?
.
Has private interests instead been funding Department of Health research – and if so, how long has this been quietly going on and to what financial amount? If private interests have not been doing so, where did the previous wage needed money come from, if not from the taxpayers of Ireland? Questions remain (deliberate?) vague answered here too.
.
Questions remain over “Guidelines” and “Rules” – in this case regarding secondments. Consecutive governments insist their invented guidelines and rules should always apply – but have guidelines and rules also got their own foundation in law, to back them up? If they can be ignored, with no actual legal backing in further created legislation, how can there be legal based accountability?
.
Would judges, courts or even department staff be imposing penalties on others without any actual legal basis – and not just on the Trinity secondment issue? Are guidelines and rules also law – or have lesser legal standing – so they can be usefully ignored by others, at deliberate quiet times?
.
How can a person be held to legal account if the guidelines and rules are not also prior established in legal standing? 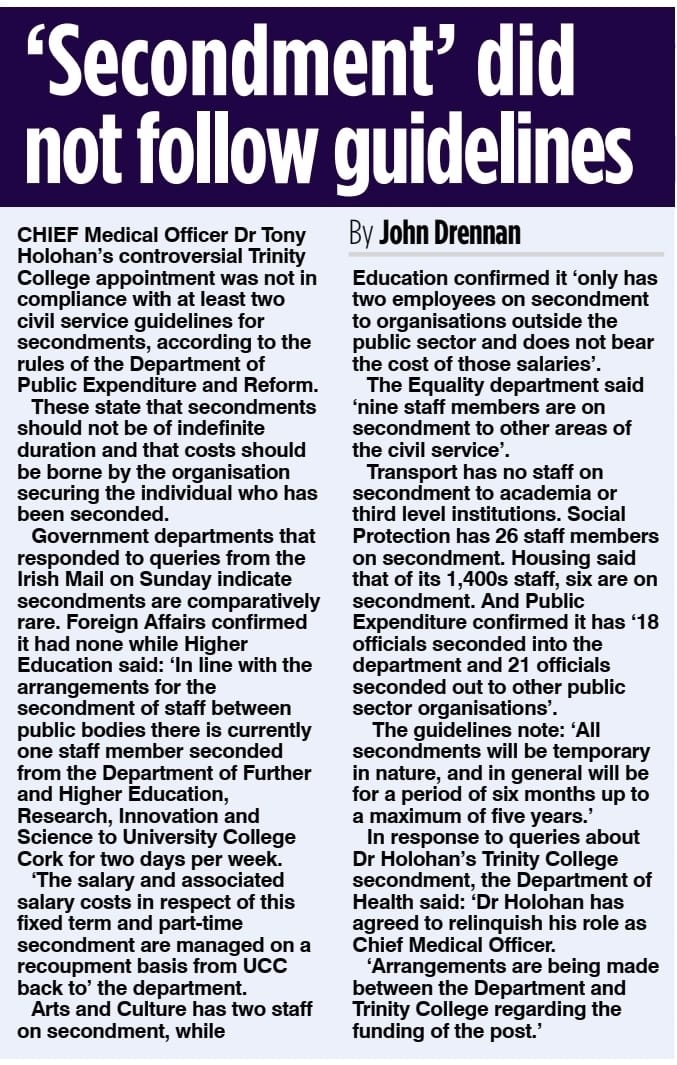 .
Questions remain also surrounding Mr Watt regarding how he was able to transfer another person to an outside institution, who was not in fact legal resigning – just move in open-ended secondment – and was supposedly able to keep their government high level of wages, pension rights and other possible perks.
.
Apparently by-passed, besides the Taoiseach, Mr Stephen Donnelly has been left with ‘egg on his face’ as he too was left to become one of the last to know about the movement of a Department of Health top staff member! How could this come about and who should be held accountable for this? Should someone indeed be held accountable? Can they in fact, be legally held accountable? Is the government afraid of these questions being asked – and will they answer them?
.
Mr Donnelly will likely be replaced in a December cabinet reshuffle as Leo Varadkar takes his Taoiseach seat back from its current temporary occupant. The Trinity issue will be seen as one more nail in the coffin of Mr Donnelly’s eventual position removal even though in this case, he didn’t sign off on the matter but was just completely by-passed it appears.
.
With a Taoiseach and Minister for Health able to be apparently by-passed with such ease, two major further questions arise with others.
.
1. Who is actually in charge of the HSE, an appointed minister or an appointed civil servant?
.
2. What other departments could operate like this, if other department heads decide to just go ahead with matters without clearing them with elected ranks? Is it all legal to do do? Where does accountability rest? Does it even exist?
.
Fine Gael are quietly thanking their ‘lucky stars’ this next controversial episode of a 2020 formed government, lies another feet of Fianna Fail. Their own previous version of unusual department circumstances in #ZapponeGate, brought enough shame on themselves. They are happy to set some distance from the latest government farce.
.
With members of the public nationally looking at the debacle alongside elected on all sides of a Dail and Seanad, many are asking an ultimate questions: “Will anyone direct responsible for this entire HSE/Trinity mess, be actually held accountable – or as has happened all too often before, no one will?
.
As Michael Martin calls for a report from Mr Donnelly, how can another figure directly involved in the farce be then asked by Stephen Donnelly, to investigate the farce, to which that top figure also has to investigate themselves? How is this investigation madness even possible?
.
Another “I investigated myself and found nothing wrong” situation?
.
Will the government better clarify department roles, their legal job position limitations and methods of day to day operating – or will questions just be asked – and then once again, little or nothing further done?
.
Will heads roll or is it back to the usual “No accountability” situation once again, care of the usually involved political parties?
.
The 2020 created government soap opera, rolls on.