Just a number of days ago there was a large marching protect in the Ireland’s capital, Dublin. This one was over the Mica situation that the 2020 government continues to not address fully. In another post, I shall explain why this is so. The protest was reported on RTE news as “Hundreds turned up”.

The truth was that in fact, it was not “Hundreds”. The truth was in fact, it was thousands of people. Now, a one off ‘mistake‘ of this kind might be explained away by poor reporting or maybe the journalists of RTE had their glasses all fogged up as they viewed the protest – but all joking aside, this is now typical inaccurate fare from RTE, and its national TV/Radio broadcasts.

RTE for some time has turned, according to many listeners and observers, from a “national” broadcaster to a “state” broadcaster. One serves the nation and it’s people, their wants and desires, the other serves the state as a formal voice, it’s propaganda arm and involved in a symbiotic relationship with elected – each one knowing it needs the other to survive.

RTE has taken a turn for the worse, it’s been notable remarked, since the time of the water protesting in regard to proposed government charges and the setup of the registered private company, Irish Water. With every protest, RTE media lied and continued to lie more in regard to attending numbers holding public gatherings on the then water matter alone, around the state. Indeed, many a protest that occurred outside Dublin went unreported despite serious sizeable mass numbers turning up.

Why the repeated continuous silence on many a protest? Thinking beyond RTE buildings – then and still now – is that the state broadcaster didn’t want the further population of Ireland to become far more aware of just how much unrest and disagreement there was with the government of the day. A government that was helping to keep RTE top directors in their extremely well-paid and perked positions. RTE couldn’t be over seeing to help bite a hand that was massive feeding it.

The emergence of the hashtag “#RTEcensored” was born.

Since the days of Irish Water protests, and the many people standing in their own estates, defending their properties – the vest majority of which went unreported for months as it all continued – RTE has continued to (a) completely non-report many events or (b) when they reluctantly have to, report them in such a way as to impose they were one-offs, poorer attended than reality or that there was little national support for such protesting events.

The amount of items minimised or completely ignore has rapidly grown over time. A fast way to check just how much, is to word search “#RTEcensored” on Facebook or Twitter. You can also click/tap on the hashtag to bring up corresponding censored reports that have been played down or completely blanked by RTE or censored of many greater facts. Sample LINK – LINK

* One major example of total censorship, is on the matter of JobPath – a government scheme/racket that continues. A setup that has cost the public €300 million so far, for a failure rate of over 93%. This setup involves mass corporate fraud with state assistance, extortion, coercion, bullying, assaults, attempted suicide attempts, human rights abuses, misappropriate use of state forces and resources, mass state pressganging activities, repeated illegal money stealing by a government department and a minister – which they reluctantly had to admit to in a court room – along with admitting they were doing things they had NOT even got the legislative powers for! Despite a mountain of evidence given into a PAC in the Oireachtas along with 5 years of collected sample victim statements, RTE continues to completely bury the scandal and how it reaches right into the heart of Fianna fail, Fine Gael, etc. There are still Seanad and Dail representatives daring to lecture the public on law matter when they, themselves ate up to their own necks in illegal past or still ongoing, current actions.

All this and more RTE has completely censored. RTE while reporting on abuses of the past – as those governments are long gone with their then elected – is now continuing not to report on JobPath and those elected attached to it, that have incorporated their own actions to mass criminality and human rights abuses. It’s a modern day national scandal, deliberate massive unreported by RTE. LINK 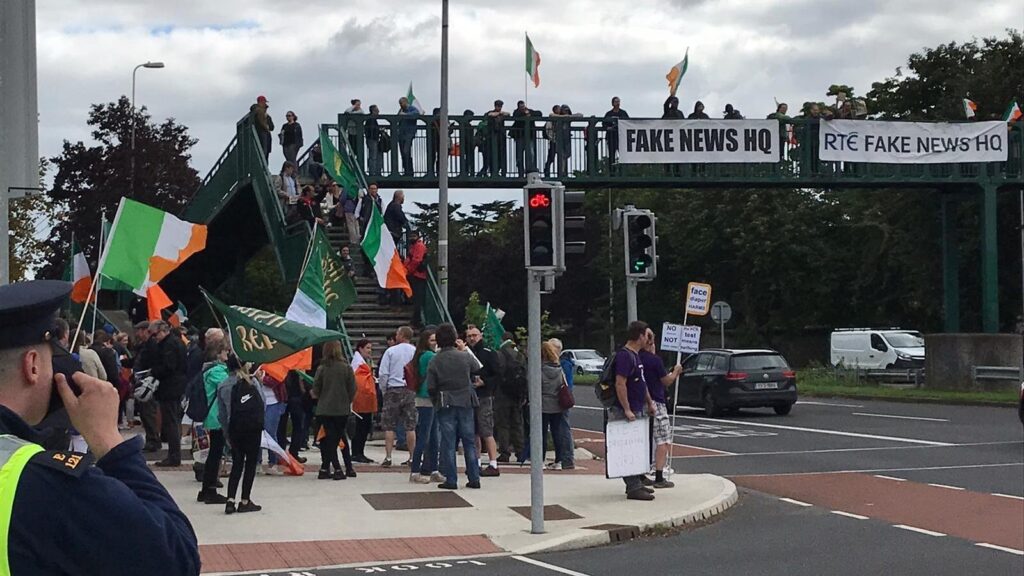 The reputation of RTE and its trustworthiness has taken such a hit that for a number of months now, it has had no choice but to run a campaign across its own network espousing that RTE news is trustable. This campaign didn’t come out of the blue from nowhere. RTE has been trying to mend the previous ‘bad seeds’ it has sown with a public that has grown weary of its censoring, downplaying, editing ways. Things have got that bad that many a protest has even occurred at regular intervals at RTE building location by many members of the public that are continuing to object to their bad ways.

* Now, to be fair, some – certainly not all, just a small number – of those that have been opposing the questionable ways of RTE news and their ability to report with accuracy, have themselves, not been truthful in some things they too have been putting out to a nation of people. Some of those that have equally lied, have done so according to their own agenda and aims. Some of this has been like RTE, to misdirect people, minimise own bad actions and misrepresent certain aspects.

Indeed, it’s the method of licence funding that now is further becoming controversial. Fianna Fail, Fine Gael and the Green party needs RTE to a great extent. It’s their main voice at six and nine o’clock nearly every day and on the hour, all year, though radio. The idea that is being subtly suggested as a modern way forward for the service to remain public funded, is to do away with the far outdated method of TV licence collection. Instead, a mafia made up of individual parties, want to future impose an increase upon good or services you might buy or use beyond just RTE. In other words, in the future that next loaf of bread, pint of milk, house purchase or whatever, could be bump increased in price due to a further RTE levy imposed.

There are already a large number of objectors to this proposal and as current parties continue to push their agenda in this, resistance will increase. It definitely won’t be a vote winner for them.

More and more people are saying that those that want to continue using RTE service, should pay for them direct. Pay-per-view for RTE services is being supported by an increasing number of the nation’s public – but here too, RTE has often censored this whole topic, downplayed those that support pay-per-view and given more air time to those that are supporting the levy agenda.

Opposition to the levy agenda say that RTE should be self-supporting. They look at other world TV stations that have their own revenue streams. Other national services, like RTE, have product placements within actual programmes, adverts between programmes, related purchasable merchandise, make TV programmes and films that are then saleable for international broadcast and other methods of finance gathering.

Why RTE can’t do just the same, instead of imposing a charge for a service that many don’t actually want, is a question more and more of Ireland public, are asking! Many of those asking, are being threatened with fine impositions, after being government coerced into paying for something they have no use for. Illegal criminal gang members have gone to prison for trying similar actions. The government gives itself a Ireland legal pass for its human rights abuses – but is conflict with EU law and an international signed Human Rights Declaration. Double standards – but then that’s nothing new for Fianna Fail, Fine Gael and those that ashamedly stand with them.

If the unofficial connection between some political parties and RTE is broken by the imposing of per-per-view – so that the broadcaster no longer needs to suck up to government parties for maintaining its current primary revenue stream, then political heads of old parties know their ability to influence RTE actions and policies will be far more weakened. Truth be told, they should not have this ability in the first place but many in Ireland suspect this is very much a continuing situation.

If we want a more independent national service rather than just a state broadcaster, per-per-view is considered more the way to go.

…But then, that doesn’t suit corrupt elected – and their parties – so they will continue to do their best to knock this one idea on the head.