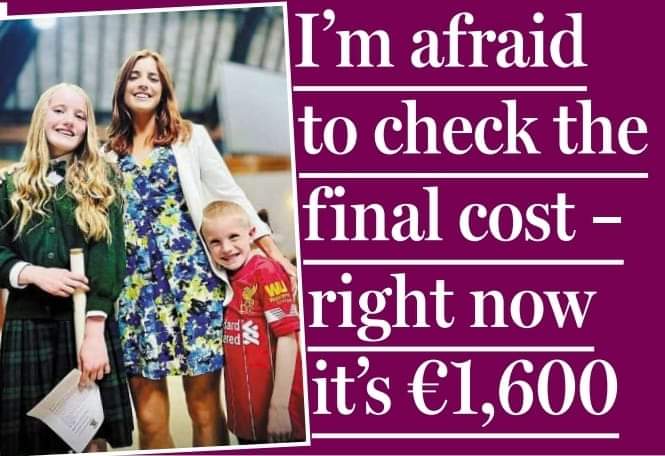 Credit unions are showing big increases in loans asked of them. The reason? Crazy school costs. Expensive uniforms – for example, one shop in Drogheda is charging €135 for three school badged tops and that’s without additional badged jackets they are told to buy at €50 a pop, badged t-shirts and other items, all at expensive prices. A shop that’s allowed operates a local monopoly.

Local and national government elected refuse to openly talk and resolve this and other related matters. They offer local radio soundbites at best, then do nothing once again.
.
Then there’s the now annual “Registration fee” (why now, do you have to re-register your child every year? Suspicious as hell!) that’s appeared in many schools – after schools were told to stop forcing/pressuring people to pay “Voluntary fees”. Local elected here too, won’t publicise the issue nor tackle it in their area. Some 65% of schools however, are still also demanding the voluntary fee. Parents are still being pressured to pay in total, up to €65 Million a year through these additional fees.
.
Credit unions are reporting up to 20 more times amounts of money being asked to be borrowed, to help cover school costs, compared to amounts of requests asked same time last year.
.
St VPD has gained 110,000 calls for help, greater for this area too since last year. Barnardos has seen an additional 10% increase in calls for help.
.
A survey recently exposed that two thirds of parents are being hit hard by back to school costs. 29% of them are getting into serious financial debt due to these costs alone.
.
Average cost of basics for a fourth class in primary is €424.
In secondary, average cost for first year is €814, fifth year = €722 average.
.
These average costs don’t include transport costs for additional parents.
.
After school care also has rocketed. Average cost another €184 per student. Up €27 Euro on last year. Followed then by extracurricular activities at an average €167 per student. There’s a sharp rise in people here too, having to deny their children such activities. Last year 46% found they had to cut them down or out. This year, that’s risen to 67%.
.
Labour, Fianna Fail, Green Party and Fine Gael party, remain unwilling to correctly address the uniform rip-offs, the shops allowed operate monopolies, the daft high school book prices set by another shower of monopoly operating book companies deliberately adjusting books so new versions have to be re-bought with each new year. Every year they duck the scholastic matters that are only growing far worse.
.