Eamon Ryan by his own actions of ok’ing his party punishment actions against two of his own TDs, is the latest dose of double-standard taking the total piss.

For a start, let’s remind ourselves what the party ideology/thinking was about the National Maternity Hospital before the party sold its values for the price of gaining a seat at a government table – see attached graphic. 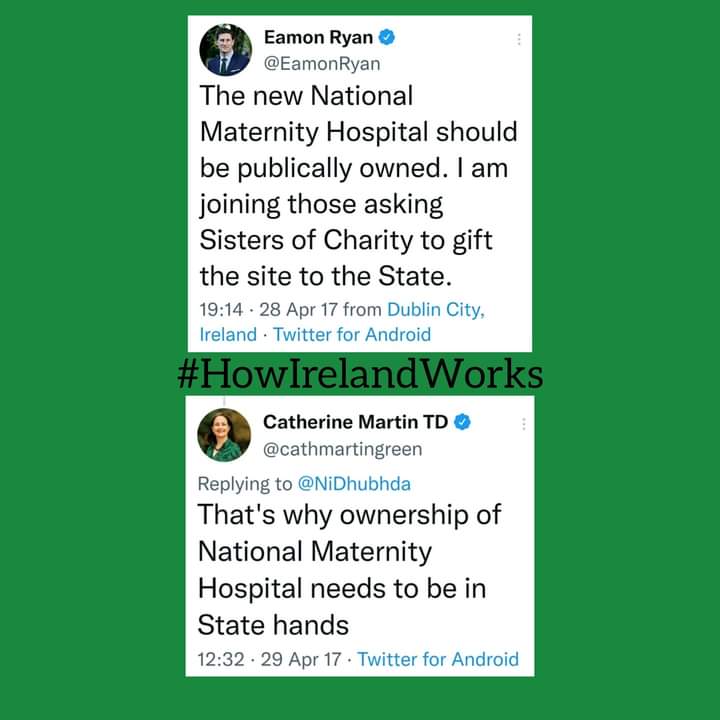 Now, the treacherous Green Party punishes two of its own TDs for actually sticking with the partys original position. An original position prior expressed by its very leader previously. You could not make it up.

We also see once again, a government party bullying a person over their legal right to democratic vote according to their values held – and in fact, as they were each elected by their own constituents based on values at election time (or before), we see a party undemocratic teice bullying humans who wish to stick with their values that they possessed as they entered a newly formed coalition.

In short, a party thug bullying humans, to make them vote against the way the party itself actually stood – before it was later coalition deal bought off by FG and FF.

Unbelievable stuff – but still happening right in front of all our faces.

The two TDs now suspended for six months, now brings the government Dail majority down to ONE. Another scandal and another opposition motion – if another brave TD is willing not to be party bullied on their democratic right to vote – could see this utterly rotten government gone before 2025. If only…

For the record, the two TDs that are now suspended, have previously also gone along with many other questionable Green Party/FF/FG stunts and uturns – like allowing the continuation of the pressgang #JobPath racket, #CETA, #Pesco, the imposition of carbon taxes and subsequent hikes, and much more.

They stood by other government party bullying of people, as said people chose to stick with their own original values they put before their local electorate at prior election time.

FINALLY, I had to laugh at some papers scaremongering over the last 24 hours – an obvious attempt to try intimidate the two now suspended TDs into getting them to vote with the party over the #NMH scandal.

The papers were saying “…they might be kicked out of the party if they don’t vote with the government“. Total rubbish. Although suspended for 6 months from the party – and that was done very reluctantly due to the now one seat government majority existing – there was NEVER any bloody chance of the Green Party going to give away two Dail seats, especially at the present time when they are now down to just a one majority tightrope precariment.

The hypocritical Green Party had to be seen dishing out a punishment – if only to let other government TDs see what might happen to them if they stand up for themselves – but there was NEVER any chance of the two TDs being total ejected from the party. …Not as long as the party remains in current government.

The 2020 government and its many farces, rolls on. You can be sure there’s more traitorous acts and hypocritical devious antics to come. It’s what this current government does well. 70+ so far.