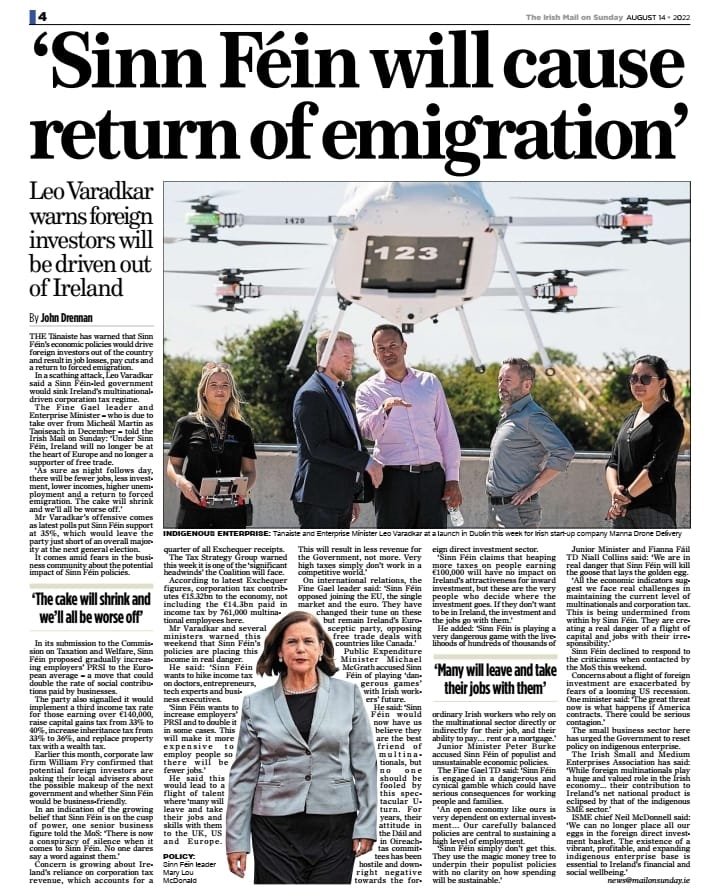 Leo is deliberately firing off more scare tactics today. No doubt RTE and other government favouring media will run with his planned uttering. They are planned. They are part of a 28 page document, created through a series of FG secret held meetings. No surprise, it became another FG leaked document. No surprise, FG friendly media won’t mention anything about it or how it too got leaked. Whole topic #rtecensored.
.
Back to the elephant.
.
Leo says that our youth will up and leave when SF take over. Leo is fully aware that our youth are ALREADY more upping and leaving – but as far as Leo is concerned, that’s beside his point. That greater nugget of truth doesn’t fit into his scare tactic scheme.
.
If more of our youth do leave, and likely they will, I say it will be an END falling domino result. A result long created as Fine Gael and Fianna Fail started to push Irish domino’s previously over.
.
If more youth leave in 2025 onwards, it will not due to what has suddenly changed in 2025. It will be due to continous terms of Fine Gael and their wrecking ball swinging for many years. In fact, since 2011.
.
Simple example.
* 2011, FG gains government – hospital waiting list was at 200,000.
* 2022, now stands at 900,000+. One fifth of the nation. Sheer madness and glaring open, continous total incompetency. That just one department. One failing domino. People terrified to get sick.
.
Then we have rocketing food costs. Fuel costs. Accommodation costs and lack the of. Insurance costs. Power costs. Destruction of farming, fishing and rural communities. Present day government pressganging of civil servants and civilians into private companies at lower wages, lower rights. Citizen rights also weakened. Media journalists more planned to be bought off. More cronyism, nepotism and law breaking judges, more little accountability and justice for the small person, on it goes…
.
All this crap will indeed cause youth of Ireland to leave. Who can really blame them? They will continue to leave in 2025 as they continue right now. As they will continue to leave in 2023 and 2024…
.
The only thing is that by 2025, a far bigger mess will be inherited by the next government. That mess will have been long created and its domino falling, knock on effect, will have been started by the current, totally corrupt government parties in present office.
.
WE ALL KNOW THIS.
.
So, yes. It’s possible that when the next government takes over, our youth will leave – but they will be CONTINUING to leave, not STARTING to leave. An important aspect. One you’re not meant to cop!
.
Fine Gael and Fianna Fail through greed, corruption, cronyism, nepotism, pressganging, incompetence, conflict of interest voting, destruction of rights to self determination, heavy taxes, charges, levies and more, have caused the first domino’s (persuading factors) to fall – that in 2025 and onward, will indeed cause more continuing youth to leave.
.
However, you are not supposed to cop this bigger picture. You are supposed to be stupid and swallow Leo Varadkar’s scare tactics that falls again short of full picture truth. Yes, Leo and the current government thinks you are that stupid!
.
I suspect a great deal of you are not. Next local and national elections, please God, prove me right.

P.S. Global healthcare firm Abbott is to build a manufacturing facility in Kilkenny and invest in Donegal, representing an investment of €440m and the creation of 1,000 jobs.

.
They are going ahead with this FULLY KNOWING there will likely be a SF government after 2025. Abbott don’t appear to be worried – and that should tell you something as Leo Varadkar this very day, tries to throw out a new dose of FG scare tactics.