The P&O Factor For Ireland 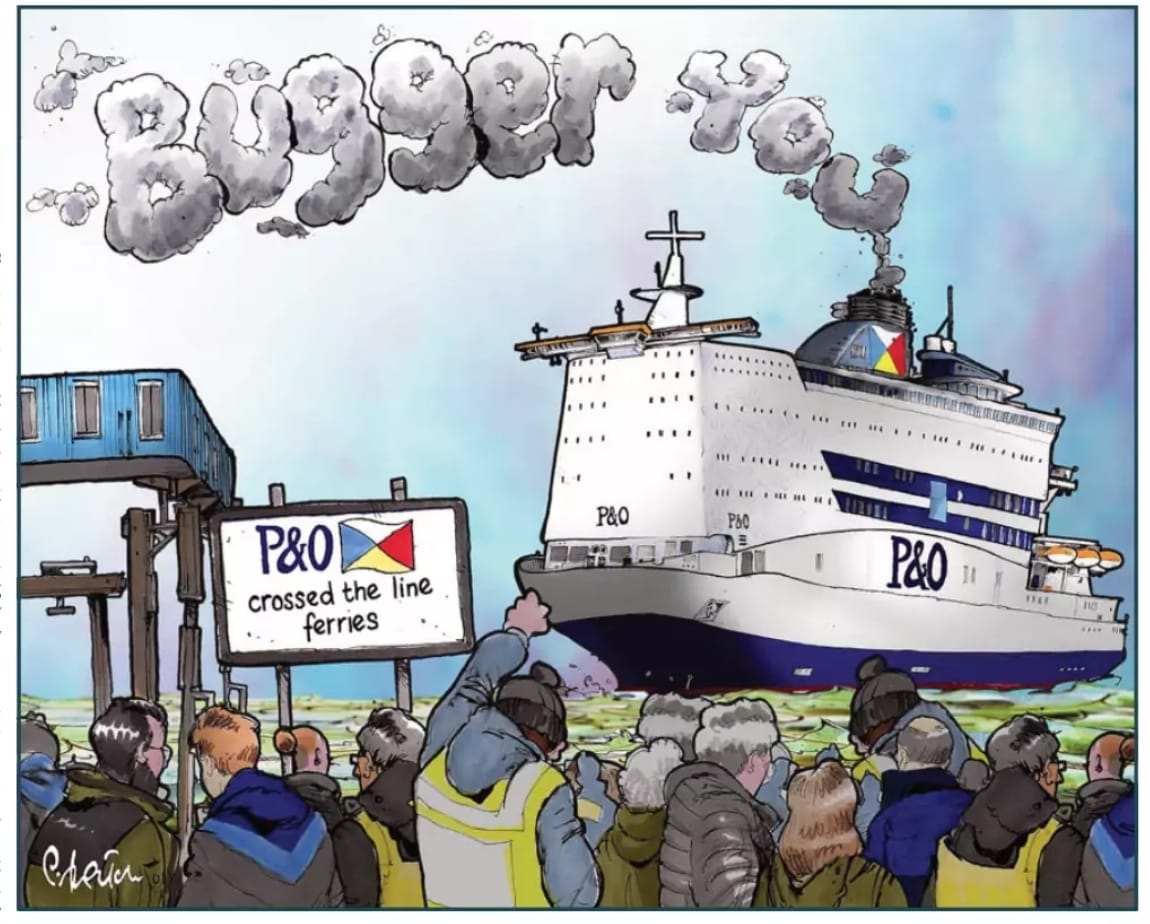 #TimeForBetter
.
We all have seen the recent news reports of 800 staff let go overnight, without warning by company “P&O”. For the record, the company is just one of many further controlled by “DP World” (Dubai Ports World). Yes, Big oil Arabians have control over our international ports too. DP World in turn, is owned by Dubai’s Royal family. They now have the power to hold ports of Europe, to basic ransom/blackmail – for if they are even attempted to be prosecuted for treating now ex-staff like dirt, they will threaten close down many ports and invoke a war of national supply attrition. They own 70 ports. In 2021 alone, DP world saw it’s revenue intake increase €10.8 Billion. They are a power all to themselves!
.
* Tanks are no longer needed to take over a state – it can be done with banks instead! Just look towards a Chinese government for further examples!
.
Governments fear them and including Ireland politicians of old parties, still willing to shake the hands of those that own them – that also have brought about the deaths of many including a journalist murdered and chopped up in one of their embassies. To date, they still refuse to disclose what they did with the body. A few days ago they chopped the heads off of 80+ people.
.
Even after that, Irish elected are still willing to shake their hands that it is said, are ‘covered in the blood’ of many. Money talks!
.
.
On The Ground Reality.
.
Such mass sackings have become all too common in Ireland – never mind also elsewhere. The less forgetful of Ireland will remember the mass sackings of Cleary’s staff. Some might remember the mass sackings of Dixons staff in Ireland. One evening staff were saying “Goodbye” and “See you tomorrow” as shops closed – only to turn up the next day to shutters down locations they worked in for years or decades, an A4 page posted up on the shutters informing them that they were all sacked.
.
This reality has gone on all too long in Ireland and elsewhere. You would be led to believe that European legislation is enough to protect the jobs of workers. When it comes to mass sackings, such claims have been proven time and again to be total rubbish.
.
European legislation espouses that a (meek) threat of imposing fines upon a business, is enough to stop immoral, overnight mass sackings. It’s total bollox – and elected ultimately know it. Once again, it must be pointed out that those that are doing some of the sackings, can hold a state to ‘ransom’ should it later even try to punish those guilty. So, at best, PR fines are imposed and hands slapped.
.
The mass sacked still remain mass sacked!
.
The continuous mass sackings that occur in Ireland alone, expose that our very own job protection legislation are piss-poor to say the least. The short notice, mass sackings still occur. An ongoing one? Tesco’s in Ireland, firing all it’s security staff – but telling many of them they can join an incoming agency to keep their jobs – at a lesser hour rate and lesser additional benefits. Ask ex-Curry or ex-Cleary’s staff how good is Ireland’s employment legislation!
.
.
Ultimate Truths.
.
Fianna Fail, Labour, the Green party and Fine Gael know that our own legislative laws to stop such short notice mass sackings are not adequate enough to cause them to cease.
.
All four parties still will not create the clear legislation needed to protect the likes of Tesco’s staff that can be sacked one minute – and another minute later, near extorted and blackmailed into being pressganged into an agency – if only to keep a job at a lesser pay rate…
.
All four parties have – not over years – but over decades – had the opportunity to create the necessary job protection laws that are very clearly still needed as short notice, mass sackings continue. They have not only consistently failed to do this – they have repeatedly refused to. Still, brainwashed people still re-vote them back into government office.
.
It’s disheartening to see people voting for others, who in turn once in, will again not do what’s ultimately needed to be done. We have too many brainwashed people re-voting for those that have already repeatedly failed them and what’s more, further left open to right’s abuses. Well, if the same four parties do it – and they do to this day – it seems they are all too willing still, to let others do it too. Truth.
.
Ireland needs many things to be sorted before we even contemplate of joining other matters further outside our border. We must get our own house more in order before we dare to try and fix others. However, our traditional rotten elected deliberately keep many distracted with other matters while they continue at home, to let us down in many directions.
.
As regards the P&O latest example, Ireland is crying out for greater legislative protections in regards to job protection. The guilty must now be told they are not only open to far bigger fines – but that they licence to operate will be automatic withdrawn in some cases and never allowed exist again in Ireland, so that they may try on other later worker abuses. The time has come for those with the balls to do it, to stand up for the workers of Ireland. They have been kicked around too much. They have been pressganged too much. They have been exploited too much by past and current governments – and that’s even before the companies then jump on the abuse bandwagon.
.
Then again, in truth, it’s time the brainwashed voters of Ireland also copped themselves on – and place their votes in fresh alternative directions – away from those that are consistently betraying them. Remove the self-imposed blinkers.
.
Workers of the world unite? At home, we’d be now better starting with “Voters of the nation, unite!”