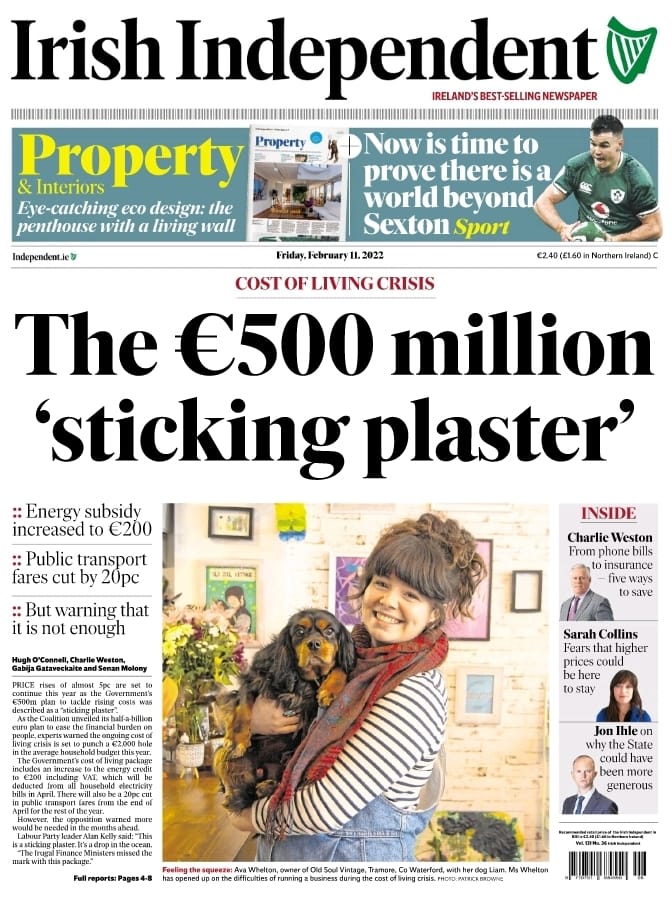 .
“The Sticking Plaster” (LINK and LINK). That’s what the Irish Independent calls the latest government economy measures. The words from opposition, not surprisingly, say much the same in short. Now, we must be honest and admit that “Some opposition would find something to throw at the government. Their opposition!”
.
That aside and with honest review as possible, what does the introduced changes do for people?
.
The travel price reduction is good to get, however the gain in the pocket for travellers, for a few months, will be government regained later when prices will NOT only go back to normal at the end of year but will be further increased again as already planned.
.
The €200 power boost is absolutely welcomed by many. No question. It is however, a drop in a big ocean of price increases that 30+ hikes have brought in the last year. Even worse, like the later year travel price hikes, the government later enforcement of more carbon tax increases, will further help burn up the €200 ‘gift’ – and then continue to take more!
. 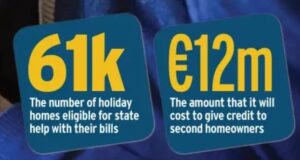 .
* In short, the temp’ travel reduction and €200 power ‘gift’ of people’s own tax taken money given back to them, will be grabbed back later yet again. However, not only grabbed back but even more taken in more increased amounts by the government – and will continue to do so for years to come.
.
The government ‘gifts’ will see all given something. This includes over €12 Million to people have have the luxury of holiday homes who gain €200 for every property they have. Yes, including landlords, it appears, who might or might not, pass on the ‘bonus’. Of the €500 million rebate here, €308 is temp’ going towards those that need more long term help. The rest seems to be going to those that could live comfortably without it? Including TD’s themselves.
.
The government says that they wanted to get money back to people as soon as possible – but later will be grabbing it back, with ‘interest’ for years to come!
.
Other temporary changes are welcomed – but they too are just that, temporary. Sooner or later, the higher bills will return, likely with company increases too – besides the later government increases. This is an unfortunate fact that even the government cannot change – but they could – but won’t.
.
There is much more they could have done but didn’t.
. 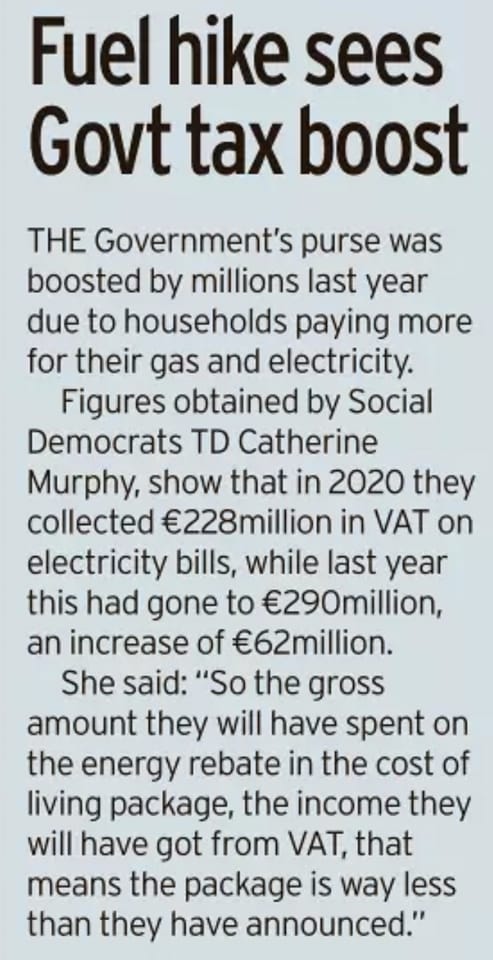 .
The carbon tax on average adds €80 a year to bills per household and that’s before later increases coming when another €41 will be began added in May. This increase alone, should have been abandoned, never mind the previous principle tax reduced!
.
Fuel taxes add around €900 on average, a year to car owners. Nothing here has been addressed or reduced. An opportunity deliberately huge missed.
.
There has been no further rent freezes or even percentage rate limits sets – on the whole as a nation or for specific housing regions.
.
VAT hasn’t been addressed on many basic goods, not also including on insurance, etc, never mind an overall reduction. Short and long term, this would have been felt in the pocket. Help with child care costs, be it vat reduction or direct greater financial help, could have been looked at. It wasn’t.
.
When people do not have the ability to pay in full, their additional annual motor tax (yes, another tax on the same car as the fuel tax is taking), the payer of the motor tax, paying through instalments, is further punished with an additional €57 bill add-on! This simply needs to go – never mind reduction in the principle tax. All car traveling workers would gain here. By the way, you pay a state charge also on your insurance – so again, you are now triple taxed on the one same vehicle.
.
Homeowners, the lucky few, above the €300,000 price level, has to pay an additional €40,000+ in government taxes. This is just ridiculous. An outrageous taking advantage of people trying to put a secure roof over their heads, even before the annual household taxes then kick in too! Both too need to be re-looked at.
.
The government cannot directly reduced the high bank service charges that they impose – but could apply pressure on them, to bring them down – but the government could look at its own imposed bank levies there that amount to €35 a year. This in addition to the DIRT tax on people’s savings. So yes, here too people are bring twice state taxed on the same possession of something, their savings.
.
There is much they could have done but have not. I have suggested a lot of the above previously, repeatedly. Instead, they have gone for a PR win – but even the Irish Independent questions it and that’s indeed saying something!
.
Their measures are a temporary sticking plaster applied to make it look like they are doing something – and they temporary are – but in the long run, are again not greater addressing many issues – while later, also taking back what they temporary give!
.
It’s currently #HowIrelandWorks under the usual Dail parties, who are not up for real change beyond cosmetic top layer ones.
.
IRISH INDEPENDENT QUOTE: “The research found that 18pc of those polled said they were in financial difficulty. This compares with 9pc saying they were struggling financially when the same question was asked early in 2020.
.
Rampant inflation has led to calls for the Government to do more to cut the high cost of living in this country, which has been blamed on costly taxes and low levels of competition. Household costs such as rent, mortgage rates, gas and electricity are a staggering 78pc above the European average, according to Eurostat. Government charges, such as stamp duty, carbon tax and VAT add hundreds of euro to the cost of living in Ireland each year, across energy to banking and insurance.
.
Daragh Cassidy of price-comparison site Bonkers.ie said many costs, such was the spike in world energy prices and Brexit, are outside of the Government’s control. But he said there were numerous ways in which the Government added to the cost of living here.
.
“At 23pc, our standard rate of VAT is one of the highest in the world.” However, there were other charges such as carbon tax, excise duty, stamp duty and surcharges which added to the cost of living in Ireland too, he said. “Despite Government protestations, these are all within the power of Government to reduce or abolish if it wanted to,” Mr Cassidy said.
.
/END QUOTE.
.
FOR THE RECORD. Ireland’s long-term debt is among the world’s highest. It now stands at €230 Billion Euro. This year the country will still be borrowing an additional €7.5bn. Later, this will all have to be paid back too. Food for thought.
.