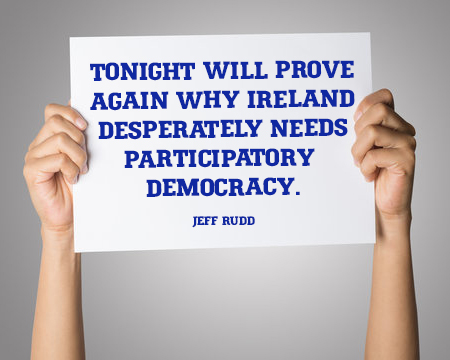 Once again tonight we will witness the result of bought votes by Fianna Fail and Fine Gael. I would include “The Green Party” under normal circumstances – but they don’t need to be bought off. They just are operating on personal greed for as long as they can before their 2025 coming disaster, while also turning a blind eye to everything the two Mafia partners do wrong and consistently fail at. The Green party leaders are just seeing out their remaining time.
.
I have long sought “Participatory Democracy” (LINK: HERE). A better form of “True Democracy” that allows the public with enough national numbers, to say “Enough!” – “No more!” – and then able to bring about change through an additional incorporated system called “Recall”.
.
Michael Martin says that the general public do not want a general election. This is debatable – if only because he’s partly saying this so one doesn’t happen. He certainly doesn’t want one. He doesn’t want to be going down in history as a loser (too late!).
* What percentage of the national he’s actually speaking for, is also debatable seeing as only 22.18% of the box-ticking population, actually voted for him and his party!
.
Has be been on the streets of Ireland every day for the last few months to hear the people speak? Like hell he has! He’s been off missing in action too many timers, ducking his own party members, ducking party meetings, ducking Dail appearances, ducking TV appearances and more. He’s been busy jaunting around the world and getting his own picture in the now familiar “War Tourism” exercise that many EU heads are embarking upon. He has a bucket-list to fill before he’s replaced by a self-admitted national leaker.
.
So, let’s tell the truth here. He’s (a) either listening to what his biased party members are telling him, (b) what his biased business mates are telling him (c) what is occasional visited Cumman friends are telling him or what his biased media mates are telling him? He sure as hell as NOT been on the streets of Cork or Dublin on a weekly basis, to hear out the mass general public.
.
His own mental conclusion “The public don’t want a general election”, is one being tried sold to a nation he has not spoken to. he’s just hearing what he wants to hear – what he wants to think in bias – and that he wants to pitch as fact – when repeated polls exposes EXACTLY what the public think of Fianna Fail and him.
.
TONIGHT, the bought votes will again keep him and his failing, double-standard, law breaking, corrupt mates in power for another short while. The longer he continues running the Fianna Fail titanic ship, the more he dooms the party – so the suffering people of Ireland can at least take some small comfort in that.
.
Meanwhile, Participatory Democracy must continue to be sought. It’s a modern system that does away with the corrupt vote buying antics of Fianna Fail, Fine Gael – and yes, the labour party too, who have past indulged in same vote bribe activity – and they dare to then call this “Democracy”. True democracy or warped democracy? You decide.
.
Participatory Democracy would give you, your children and your fellow people, the right and free ability to halt bad government and it’s operators. You would have the ability to do this all year – any year – and not be constantly stuck with the corrupt who buy votes to continue having their greedy pocket filling way!
.
The Dail vote tonight – Sinn Fein’s “Motion of No Confidence” – will show Ireland people once again that Participatory Democracy (incorporating Recall) is more than ever needed – if only to stop while-collar greed and corruption continuing.
.
Participatory Democracy means far greater accountability. No wonder that Fianna Fail, Fine Gael, Labour and the Green Party only only refuse to discuss it, they deliberately don’t want to nation to be aware of the advantages of Participatory Democracy. This code of silence is massive aided by RTE and other biased media. They sure as hell fear greater accountability practises being instigated too. …Thus a sycophantic, symbiotic political relationship continues. The buying of votes from bad elected, including convicted criminals, says it all about what type of government we have.
.
Until Ireland get’s more heads out of their backsides and greater adopts Participatory Democracy, lets tell one more final ultimate truth. Our current corruption filled, abused democratic system will continue – and allowed to continued by the usual parties that exploit it for their own personal ends.
.
Nothing will ultimately core change till greater democratic accountability and recall abilities are far better and clearer constitution enshrined. Time for the next Irish revolution. One of the mind – where more people cop on and help bring about what’s ultimately system core needed. True people power, all year – every year. True democracy in action. Participatory Democracy. 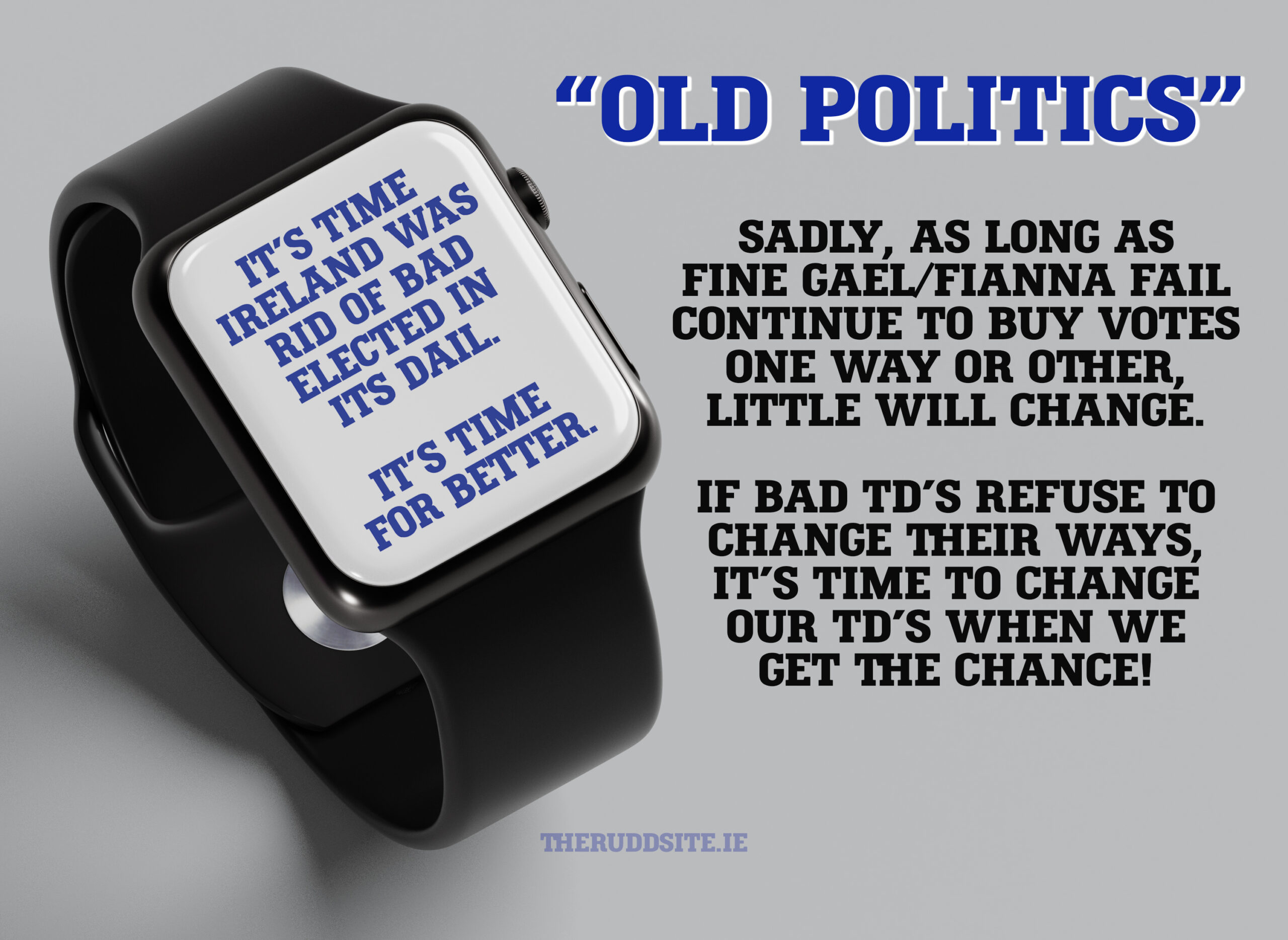