You Could See It Coming

Jan 16, 2023
I did predict it. I said it would happen – and if it appears big headed of me to point it out – I was still right again. Months ago I stated that once Leo Varadkar got his throne back, he would rubbish Fianna Fail, find ways to humiliate them and treat that party like the two main parties treat the Green Party – as something to be used, tolerated and kicked around.
.
Just one month on his power throne, in creating a national housing meeting at the last minute, a PR stunt attended by four times more property investors than problem solvers, Mr Varadkar excluded the FF Housing Minister Darragh O’Brien from the very meeting. Sticking it to Fianna Fáil again, an effort to possible rubbish them, he apparently insisted that Health Minister Stephen Donnelly attend another meeting about another hospital, preceding to then let the Fianna Fáil minister be run ‘into the ground’ and make sure he took control of the meeting – or in PR terms, made sure to be seen that he was the man in charge and not to be argued with!
.
This sounds great in PR terms for supporters. “Leo is a man in charge” – but remember, if things go even more worse in many department ways, Leo will also be seen as the captain of a Titanic ship heading for rocks too. PR stunts to evoke that ‘I am in charge and want to be seen as such” are a double-edged sword! Meanwhile, in other quiet subtle ways, more Fianna Fáil elected are getting peed off with the already antics of Mr Varadkar. There was already growing hatred and unease of his impending taking over from Michael Martin, but now that it’s happened and Mr Varadkar appears to be doing already what I predicted he would, Fianna Fáil Dail elected are starting to wake up to effects of a nightmare that they top helped to create!
. 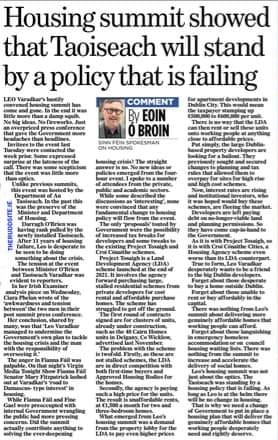 .
In PR terms, Mr Varadkar want to be seen as addressing housing and hospitals. So far, his housing efforts when close detail examined (by the likes of Sinn Fein’s Eoin O’ Broin in yesterday’s Sunday Mail) are exposed as pointless, ineffectual and indeed, farcical – but it was a good PR stunt for which RTE and other friendly paper media (no surprise) used, to give Leo great publicity. In hospital terms, after one failed term as health minister and one previous failed full term as Taoiseach, Mr Varadkar now wants to be seen as doing something about an ever increasing health crises – one of many – that he’s failed to address for over ten years.
.
That he’s doing all this in the run up to 2024 local elections and a 2025 general election, is said to be no coincidence whatsoever.
A further prediction. In truth, easy to make. Further humiliations of Fianna Fail ministers will come about in the coming months. Leo will of course make sure to be public seen to defend all his ministers but it’s suspected that quietly behind closed door there might be a smile or two on such occasions. The future will contain votes of “No confidence” towards Fianna Fáil ministers more so than Fine Gael ministers – and with elections to come, Fine Gael faces won’t quietly mind Fianna Fáil being seen to get another humiliation kicking. It’s all about votes, gaining them by PR stunts or ways to clever rubbish those of other parties – even if they are part of the present government.
.
There is already serious division over national ways to address current matters between the two main parties as Mr Varadkar lays down his dictates.
.
Just how long Fianna Fáil and especially Michael Martin, allows FF ministers and Dail elected to be kicked around by Fine Gael in the coming months, remains to be seen. One thing is for certain. Unless someone in Fianna Fáil stands up to Fine Gael antics, they will (as I predicted) continue to be Fine Gaels ‘bitch’. When Mr Varadkar says “Jump“… They will have to. After all, Mr Varadkar is the man they put in charge. Now it comes already back to haunt them. They were warned! They reap from what was sown by their very selves.